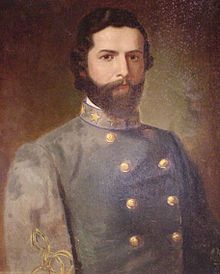 Death is an ever present force during the war, a low-hanging cloud that follows armies in camp and on the battlefield. For some on the battlefield, the end of life on earth arrives suddenly in the form of lead or cannonball. For others, weapons of war bite rather than devour, a sting that signals inevitability and the accompanying agony–both physical and mentally–of life draining away. Of those who experience the latter, unparalleled fear and horror aptly describes the mindset of many.

And yet for some soldiers–how many it is hard to know–a sense of peace crowds out fearful thoughts of death and the hereafter. Such was the case with Confederate Col. Waller Tazewell Patton, a young officer whose Christian witness in the face of death, recently celebrated in the Richmond Enquirer, is now circulating in Southern Baptist newspapers.

Prior to the war, Patton was a Virginia Military Institute graduate and a lawyer. In 1862 he was severely injured in the Second Battle of Bull Run (Manassas), taking many months afterward to recover. Returning to service, he was again injured in the field, this time in July during the Battle of Gettysburg.

Prior to the battle, Patton had had a premonition of his death. The injury he subsequently acquired came at the high point of the war for the Confederacy, as a few rebel soldiers briefly breached the far wall at the end of the long, bloody, now-famous Pickett’s charge across an open field.

A Union officer, Lieutenant Henry T. Lee, witnessed Patton and a fellow Confederate jump over the wall, whereupon they were immediately felled by federal fire. After the rebel charge was repelled, Lee walked over to the two young soldiers. One lay dead, the other–Col. Patton–badly wounded with a shattered jaw. Patton motioned for a piece of paper, which Lee provided. The Confederate thus wrote:

As we approached the wall my cousin and regimental adjutant, Captain (name forgotten) pressed to my side and said: “It’s our turn next Tazewell.” We grasped hands and jumped on the wall. Send this to my mother so that she may know that her son has lived up to and died according to her ideals.”

This week, readers of the North Carolina Baptist Biblical Recorder are inspired by the story of Patton’s death.

In the obituary of Col. W. Tazewell Patton, published in the Enquirer, we find his dying testimony to the preciousness of his faith in Christ:

“Being wounded in the mouth he could only communicate with his friends by writing on a slate. The prominent thoughts of his mind seem to have been his Saviour, his mother and his country. In a letter to his mother, written a few days before his death he says: ‘My suffering and hardships during two weeks that I was kept out in the field hospital were very great. I assure you that it was the greatest consolation, whilst lying in pain on the cold and damp ground, to look up to God to whom you so constantly directed my thoughts in infancy and boyhood, and feel that I was his own by adoption. When friends are far away and you are in sickness and sorrow how delighted to be able to contemplate the wonderful salvation unfolded in the Bible. Whilst I have been very far from being a consistent Christian, I have never let go my hope in Jesus, and find it inexpressibly dear now. I write these things to show you my spiritual condition and ask your prayers continually  for me.’ Again he said: ‘Tell my mother that I am about to die in a foreign land but I cherish the same in (?) affection for her as ever.’ The Federal officers who saw what he had written seemed astonished at the phrase foreign land as applied to Pennsylvania. He told the lady who nursed him that, though he was a young man and prized life, that he would cheerfully lay down fifty lives in such a cause.”

Doubtlessly, many Baptist mothers in the besieged South read the account of young Patton’s death and shed tears for one or more sons who are yet soldiering far from home in the service of the Confederacy.

Many years later, another Patton from the same family tree serves as an American general in a far away land in World War II.