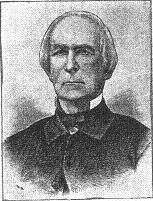 Virginia’s secession convention continues. The pro-Union vote of yesterday has solved little. Confederate sympathizers agitate for Virginia’s attachment to the southern Confederacy. Much sentiment leans toward Virginia joining the Confederacy if the North and the South prove unable to reconcile (an impossibility, by this point).

Jeremiah B. Jeter (illustration) is the pastor of Grace Street Baptist Church in Richmond (and former pastor of First Baptist Richmond). Today he delivers the opening prayer of the convention.

A biographer of Jeter’s describes the pastor’s life during the war years:

His young men, of course, joined the Southern Army, and his church was sadly crippled in its enterprises and resources. He had, at the time, an inadequate income, but he bore his ills and necessities with cheerfulness. He did little more than to hold the church together, cheer his people in their fears and sorrows, and encourage them to wait for brighter times. He did not lack a congregation during the war. While his own people were scattered, the city was thronged with soldiers, government operatives and refugees.

He was kept busy by the constant demands upon his services. He was flooded with letters from every part of the country, bespeaking his attentions to the sick, the wounded and the strangers in the city. He was never connected in any way with the army. He occasionally went out and preached to the soldiers in their encampments. He was also very considerate in his attentions to those who were confined in the hospitals and prisons ….

As an original question, he was opposed to secession. He deplored the necessity for war, and sought in his way to prevent it. If all men had possessed his pacific and Christly temper, the country would never have been torn by strife or stained with blood. But he went with his people. He was emphatically a war man. Espousing the Southern cause, he ardently prayed for the success of the Confederate arms. He watched the course of events with profound solicitude, rejoicing over victories, mourning over defeats and cherishing hopes, even in the midst of thickening disasters. But he was not bitter; this he could not be. For those against him he had no enmity, and never uttered malignant prayers. He loved his chosen cause, but he had no curses for his enemies.