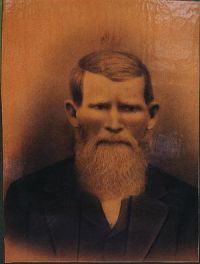 On the brink of the war, a Confederate company is formed in Cass County, Georgia (now Bartow County). Company H becomes known as Wofford’s 18th Georgia Regiment, named after the W. T. Wofford, the businessman who raised the company. The regiment also later becomes known as the “Rowland Highlanders.”

The ninth of 22 children, George grew up on his father’s farm, which was located near Cartersville. Enlisting as a Private, George rises to the rank of 1st Lieutenant in the Confederate Army. Along the way, he fights in many of the major campaigns of the war, including: the Peninsula Campaign, the Campaign of Northern Virginia, the Maryland Campaign, the Chancellorsville Campaign, the Gettysburg Campaign, the Tennessee Campaign, and the Wilderness Campaign. He is also involved in the siege of Petersburg and Richmond during the final bitter months of war.

As did many soldiers, George experiences bouts of illness throughout the war. The lingering affects of his illness lead to a furlough weeks before the war ended, after which he surrenders in Kingston, Georgia.

Smith’s story is one of many similar narratives. Non-slaveholding whites by the hundreds of thousands fought on behalf of an African slave economy from which they benefited not. Motivations for common folk like George Smith varied, but often had to do with family loyalties, companionship, a sense of honor or duty, army wages, and/or out of the belief that the slave economy would one day work to their benefit. The South’s wealthy slave-holding elites, many of whom never fought in the war, helped perpetuate the belief that the defense of African slavery was an honor and a duty, benefiting common white folk who might one day rise to the ranks of slaveholders.

Whatever his reasons, Smith chose to fight on behalf of a system which offered little tangible benefit to him personally.

Unlike many of his fellow southern soldiers, George survived the war and lived a long and healthy life afterwards. Marrying shortly after the war, he raised a family in Georgia.

George Smith died in 1903, and the Calhoun Times (Georgia) newspaper noted in his obituary:

Mr. Smith was sixty-six years of age, and, until recently had enjoyed excellent health nearly all his life. He was a consistent member of the Baptist church.