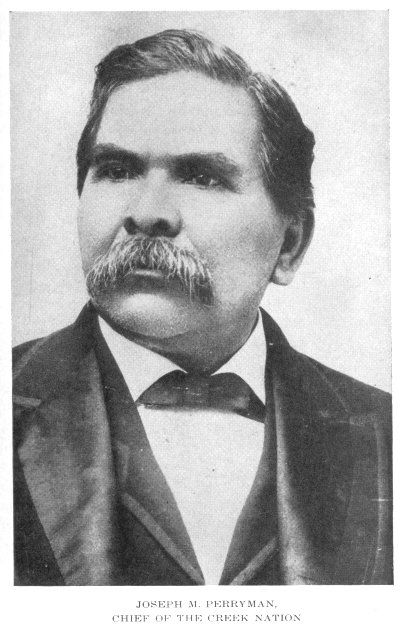 Born in 1833 to the grandson of a tribal town Creek chief from Alabama (who held office prior to the forced Creek migration westward), in the years leading up to the war Joseph grew up in Oklahoma, studied in a Presbyterian school, and was licensed to preach in 1860. The war interrupts his ministerial calling, but after the war he is “ordained for the Presbyterian ministry at Wapanucka, Chickasaw Nation.”

Upon his ordination, Joseph forms the North Fork Presbyterian Church and a mission school, and for the next four years pastors the church and operates the mission school. Yet Joseph’s religious views evolve over time. About 1878 he converts to the Baptist faith and becomes a Baptist minister, remaining an active Baptist for the remainder of his life.

In the meantime, Joseph enters tribal politics in 1874, rising up the political ladder to become chief of the Creek Nation in 1884.

Joseph’s nephew, James Perryman, as a young man also converts from Presbyterianism to the Baptist faith. As does his uncle, James serves in the Confederate Army. A translator, after the war he assists in translating the New Testament books of Ephesians, Titus, James and (partially) Acts into the Creek language.