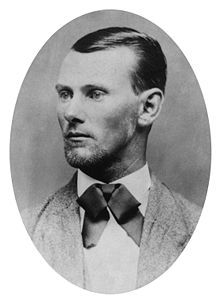 Near Springfield, Missouri the first major Civil War battle in the western theater wages. At 5 A.M. Brig. Gen. Nathaniel Lyon’s U.S. Army of the West faces off with Confederate Brig. Gen. Ben McCulloch’s troops at Wilson Creek, twelve miles southwest of Springfield. By morning’s end, the Confederates emerge victorious in the Battle of Wilson’s Creek (also known as the Battle of Oak Hills). The confrontation is the most significant battle in Missouri in 1861, and gives Confederates temporary control of southwestern Missouri.

Fighting in the battle this day is a young Baptist Confederate soldier with the Missouri State Guard by the name of Franklin (“Frank”) James. Franklin is the son of a now-deceased Baptist minister, Kentucky native Robert Sallee James, born in 1818 and an 1841 graduate of Kentucky’s Georgetown College. Upon his college graduation, Robert and his young wife, Zerelda, moved to Clay County, Missouri. There, Robert bought a farm and slaves to work the fields. He also became the pastor of New Hope Baptist Church, receiving no pay for his ministerial service. His ministry was successful, as his evangelistic preaching attracted new church members. In addition to his church activities, Robert assisted in the formation of Missouri Baptists’ William Jewell College.

Yet the Gold Rush of 1849 excited Robert, and the next year Robert and some other Clay County men headed west to seek their fortunes. Robert declared his intent to preach to miners in California’s gold camps, but shortly after arriving he fell ill, dying in a gold camp in September, 1850.

At the time of Robert’s death, Frank was eight years old. Franklin’s mother, Zerelda, remarried twice (her second husband having died) and during the war is living with her third husband, Dr. Reuben Samuel, on a farm in Missouri.

Sometime after the Battle of Wilson’s Creek, Frank becomes ill. He leaves the army, returns home, and joins a local Confederate guerrilla group. On May 22, 1863, Union militiamen raid the James / Samuel farm, searching for local guerrilla members. Frank is not home, but the militia beats and whips Frank’s younger brother Jesse, tortures his stepfather Reuben, and later has Zerelda arrested. Afterwards, Frank joins William Clarke Quantrill’s guerrillas, as does Jesse.

Surviving the war, an embittered Frank and Jesse join the Younger brothers (Cole, Jim, Bob and John) as outlaws, and soon Jesse James becomes legendary for his daring robberies. For over fifteen years, Jesse and Frank (with the Younger brothers early on) rob banks and trains throughout the Midwest and beyond, allegedly killing dozens (it not hundreds) and making headlines nationwide. The brothers marry during this time, and eventually decide to settle down. But they are wanted men with bounties on their heads, and Jesse is killed April 3, 1882.

The Rev. Mr. Harris, of St. Joseph, Mo., was introduced as a visitor. He referred at some length to the story which had gained currency that the late Jesse James was a Baptist and was buried by Baptists. This report he declared to be entirely false. James, he said, was baptized in the Baptist faith when a boy, but was excluded from fellowship in the Church the moment he began his bandit career. The speaker had been sent for by the dead man’s mother after the tragedy, and called upon her. He found that she did not want religious consolation, and was very glad of it, for he did not want to have anything to do with James. The clergyman who conducted the funeral was the Rev. Mr. Martin, a young Baptist, but his sermon from beginning to end contained not a single reference to the dead man. It was a strong and earnest plea to the living to prepare for death, and that was all. The speaker declared in closing that the sentiment of Missouri was against James. The people reprobated his life, character, and deeds, and rejoiced at his removal as a good riddance.

Frank surrenders to authorities after James’ death. He is tried for his crimes, acquitted for lack of evidence, and lives as a free man for the rest of his life, dying on the James farm in 1914.