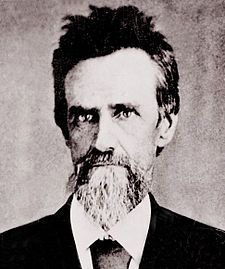 The year draws to a close with some encouraging news for the United States: the coastal city of Biloxi, Mississippi surrenders to Union forces hours before the calendar turns. The success on the Mississippi coast caps a string of coastal victories for the United States Navy during 1861. So successful has the U.S. Navy been against the hapless, fledgling Confederate Navy and inadequate coastal defenses that Confederate access to ocean waters is now severely limited. The naval blockade of Southern ports signals a coming economic crisis for the Confederate nation.

Meanwhile, the interior of Mississippi remains firmly in Confederate control, and this month Mississippi Baptist pastor Mark Perrin Lowrey (born 1828) gives up an eight year pastorate, at the urging of his congregation, to accept an appointment as colonel of the 4th Mississippi Infantry. Lowrey quickly distinguishes himself in the Confederate Army, and on April 3, 1862 becomes commander of the 32nd Mississippi Infantry. In the year-plus following he fights in the battles of Shiloh, Perryville, Chickamauga, and Murfreesboro. He survives being shot in the left arm, and on October 4, 1863 at the age of 35, is promoted to the rank of Brigadier General.

Yet Lowrey is more than an outstanding officer. His call to preaching remains, and he exercises his religious gifts in the army, becoming known as the “Preacher General.” At one point during the war, Lowrey baptizes fifty soldiers in a two week period.

Lowrey survives the war and afterwards returns to the pulpit. The now-distinguished Baptist preacher is soon appointed as state evangelist for Mississippi, and also serves as the editor of the Mississippi department of The Baptist periodical. In addition, he is elected president of the Mississippi Baptist state Convention.

Yet his most notable post-war achievement begins in 1869, when he purchases an estate near Ripley, Mississippi and turns it into a school for girls. Blue Mountain Female Institute opens in 1873, with Lowrey as president for the institution’s first twelve years. In 1887, General Lowrey dies suddenly and unexpectedly.