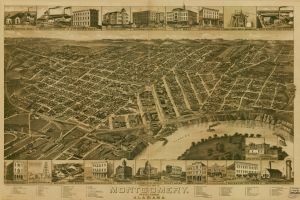 Expectation is in the air throughout the South.

In Montgomery, Alabama (illustration) delegates from South Carolina, Mississippi, Florida, Alabama, Georgia, and Louisiana are preparing for tomorrow’s opening of the slaveholding states’ convention. Texas has recently joined the ranks of seceding southern states, while in Virginia candidates for delegates to the upcoming Virginia secession convention are stumping for votes.

Northward, Abraham Lincoln – derided as the “Black” president by many white southerners who insist his agenda is the eradication of black slavery – is preparing for his inauguration in early March. Many southern slaves sense the tenseness in the air, while northern abolitionists are excited about Lincoln’s coming inauguration.

Many Baptists North and South realize that the regional conflict has crossed a point of no return, and that the yet young nation will never be the same again.