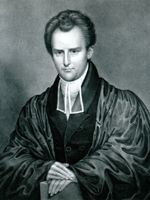 The Basil Manly clan is a prominent family in the South. Large slaveholders and fiery secessionists, they are active in southern politics. They are also Baptists.

Basil Manly, Sr. (1798-1868, pictured), Baptist minister, former president of the University of Alabama (1837-1855) and owner of some forty slaves, carries the secessionist torch in Alabama, serving as chaplain to the Alabama Secession Convention. Now, he is chaplain to the Montgomery convention of the Confederate States of America.

Basil Manly, Jr. (1825-1892), by contrast, in the past has largely confined his professional activities more to religious matters, and has doubts about his families’ secessionist sentiments. Viewing secession as unwise, he nonetheless realizes war is inevitable, and after the beginning of open hostilities becomes a devoted Confederate.

“I think we are right, and I do not shrink from the responsibility of all that I have done.”

Manly’s words to his son come on the same day that the senior Manly preaches in the pulpit of Montgomery’s First Baptist Church, imploring worshipers to pray for and support the new Confederacy.