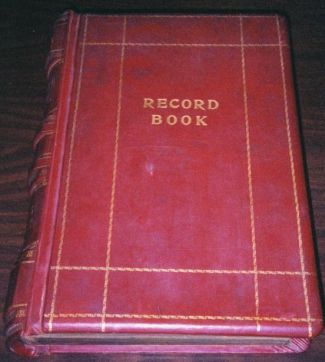 Less than two weeks after Mississippi’s secession from the United States of America, today marks the last entry of four years of “Slave Certificates” in the Record Book Adams County, Mississippi.

Slave Certificates are required by Mississippi law, providing proof that slaves brought into Mississippi  (typically from the Upper South) for the purpose of sale are not criminals and are the legal possession of the person selling the slave.

Fast-forwarding to the 21st century, Adams County (MS) officials and researchers who have worked with these slave records (discovered in the courthouse basement in 1999), believe that several slaves with the last name of “Lee” in the records may refer to a particular slave auction in Fayette County, Kentucky:

“In 1860, William M. Pratt, minister of the First Baptist Church of Lexington was asked to help in the desperate situation of a member of their associated church the First African Baptist Church. Nancy Lee, a slave, had two daughters about to be sent to the slave traders auction block and sold south. Her husband Tony Lee, a free black, had succeeded in purchasing their two daughters freedom and had turned the papers over to her just before his death. Slave traders seeing great profit to be made in selling her two daughters had visited Nancy and tricked her into handing over the manumission papers which they then destroyed. Pratt agreed to help. Nancy’s daughters went to the auction block at the Cheapside slave market near the court house on “County Court Day”, February 13, 1860. Pratt began bidding on Nancy’s first daughter but the price quickly reached one thousand dollars. He jumped up on the auction block and explained the situation to the crowd and begged them to withdraw from any more bidding. But the slave traders resumed the bidding and ran the price up to $1,700, an amount Pratt and his church members could not afford. She was sold to a slave trading firm run by Silas Marshall, mentioned often in the ‘Record Book’, who operated with his brother out of an office on Main Street opposite the Phoenix Hotel in downtown Lexington. Nancy’s second daughter was sold in the same way for $1600.”

Auctioned slaves were often separated from their families, including children and spouses. Some pro-slavery white Baptist ministers in the South were sensitive to the breaking apart of slave families, and during the war some denunciations of the practice appeared in Baptist newspapers – although the critics nonetheless defended the practice of black slavery as ordained of God.