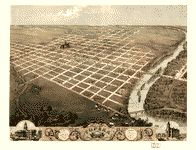 As Georgia prepares for the upcoming slaveholdering states’ convention, and Texas prepares for secession, Kansas is admitted as the 34th state of the United States of America.

For six years the scattered residents of Kansas territory, mostly poor white farmers, had struggled to obtain statehood, their efforts held hostage to the heated slavery debate in Washington. The withdrawal of Deep South states from the U.S. effectively places the question of slavery in Western states in the hands of the anti-slavery Republican Party. And now, finally, Kansas achieves statehood as a free state.

The election of Lincoln, glorious as was the triumph, was, in our estimation, far less important and decisive than the admission of Kansas. Against our devoted people have been arrayed the whole force of the slavery power. The ingenuity of the pro slavery partisans has been exerted to its utmost to prevent the recognized expression of the will of the Free State people of Kansas. Every resource having been exhausted, the persistent, manly efforts, and the godlike courage of our people have at last prevailed, and the glorious reward, so gallantly earned, has been doled out to us with an unwilling hand. Yet we accept the boon — accept it gratefully, and hasten to take our place as a free State in the glorious Confederacy. Knowing, as we do, the resources of our State, and the courage and endurance of our people, we feel that this accession will go far to fill the gap made by the seceding States.

Our people have an abiding love for, and a loving faith and confidence in, the Union. — This love and faith has been bred in the bone — it has stood the test of desertion, and even oppression; but is as strong and confident as ever. For them, we send greeting to the sister States, and if ever the time should come when the Union and the Constitution should call for defenders, we pledge the faith and the strong arm of that gallant people, who, for the institutions they loved, have heretofore trod the wine-press of oppression, and come out unscathed in honor from the trial.

Mere days after Ebenezer W. Warren defended slavery from the pulpit of the First Baptist Church of Macon, Georgia, by invoking scriptural law, Kansans turn to biblical imagery. In the pages of The Conservative, Old Testament symbolism contrasts with the biblical literalism of Baptists in the South:

Two days ago Lawrence was electrified by the announcement of the admission of Kansas to the Union. She had been a virgin Territory so long, we feared the fate of all over-ripe maidens; but as some women, like fruit, are sweetest just before they begin to decay, Kansas, in her maturity, was more attractive than in her youth. After a long candidacy, she has formed a union — a union, too, for weal or woe with discordant and belligerent States. She will take her stand by the side of those sisters who are loyal to the Constitution, and join in their appeal to those who are disaffected, first in the gentle tones of love, and then, if need be, in the stern voice of war.

But it is not meet for us to conjure visions of terror to the bridal feast — to mingle strains of sorrow with your joyous epithalamium. Let men shout till the welkin rings; let women smile till the prairies blossom and the birds sing as though it were not winter.

A little while, and Charles Robinson assumes his official robes, with more prestige than Governor ever had since the days when Isaiah sang his paean over young Hezekiah’s accession. He goes into office elevated by the suffrages of “the wisest and the bravest and the purest people under the sun.” He stands at the head of, we trust, the never ending column of Kansas Governors. After long years of suffering, under the despotism of a Democratic administration; after a long series of insults and abuses from delegated Governors, Kansas is free, and has a Chief Magistrate of her own choosing. May he be unto us all as a pillar of fire by night, and as a pillar of cloud by day.

Although Kansas is the youngest, she is by no means the weakest of the States. She has grown strong from defending herself, and from long wrestling with the Lord in prayer. She has taught Slavery to more dread her hug than the Spanish Protestant did the Maid’s of the Inquisition; and when she speaks her sovereign voice, at home and in the National Senate, treason will be sicklied o’er with the pale cast of fear.

Upon the ground, no major military actions would take place upon Kansas soil. Nonetheless, more than 20,000 Kansans would fight for the Union during the Civil War. The state’s contribution of soldiers would prove to be an important component of Union victory over the Confederate States of America.