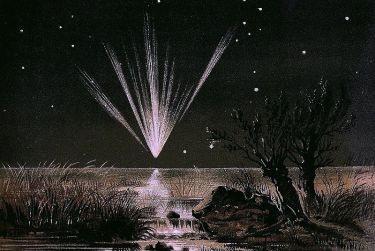 A minor skirmish takes place today. In the Battle of Hoke’s Run, Union forces cross the Potomac River near Williamsport, Maryland and march toward nearby Confederate forces. The two sides encounter one another in Berkeley County, Virginia. Pushing the Confederates out of the area, Maj. Gen. Robert Patterson’s Union troops occupy Martinsburg, Virginia (now West Virginia), where they remain for several weeks. The skirmish helps set the stage for the Battle of Bull Run / Manassas later this month, the first major battle of the war.

The general public today, however, is more attuned to a comet streaking across the night sky. Julia Stanford, a young Baptist woman in Forysth, Georgia, in the midst of reflecting on the war today, mentions the comet in her diary:

“Heard that Privateers captured a U.S. shop worth $400,000 and have moved it to Richmond. We perhaps look for peace. Still tis not as we will but as God wills – He wills right. Saw the comet tonight. The nucleus is the largest I ever saw. Situated in the dipper I think.”

Stanford sees no ordinary comet. Thatcher’s Comet, also known as “The Great Comet of 1861,” is the brightest to light the skies in some fifty years. Appearing in the region of Ursa Major, otherwise known as the Big Dipper, it arches far across the night sky and is visible during daylight hours.

Heavenly phenomenon are yet viewed by many as signs, and for many the comet is an evil omen. The New York Herald notes that many people “regard it with fear, looking upon it as something terrible, bringing in its train wars and desolation.” Indeed, large scale battlefield deaths are mere weeks away.

Everybody is still talking about the latest sensation, and calling upon the astronomers to throw some light upon the subject. The distinguished traveller was not observed in Boston until Tuesday evening, on account of a hazy atmosphere. Professor Bond, of the Cambridge Observatory, writes as follows about it:

The magnificent comet which has suddenly come in view, has taken astronomers, with the rest of the world, by surprise. It is not the expected comet of 1264 and 1556, or any whose return has been anticipated.

The train extends over an arc of one hundred and six degrees (106), from the head of Ursa Major to a point ten degrees beyond Alpha Ophinchi. Besides this long narrow ray, projected almost in a straight line from the nucleus, a mass of diffused light sweeps faintly toward the stars in the tail of Ursa Major. This is intersected by two or three faint straight rays not discernible to the naked eye.

Thatcher’s Comet leaves behind a legacy: the Lyrids Meteor Shower, yet visible in the spring 150 years later.