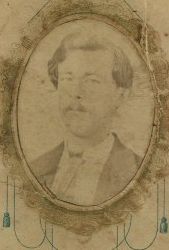 “Went to Sabbath school carried in all the books due. Stayed to Church – As usual, and as usual have forgotten the text  …

Friday there was a magnificent meteor large as the full moon. Terrified many beholders.”

Meanwhile, Alva B. Spencer, recent graduate of Georgia Baptist’s Mercer University and now serving in Company C of the 3rd Regiment Georgia, from Virginia writes to his friend Margaret Lucinda Cone. He describes an outing his company took to view Fortress Monroe from a distance. The fort is in Union hands, and remains so for the duration of the war. Located in Hampton, Virginia at Old Point Comfort on the southern tip of the Virginia Peninsula, the fort is informally known as “Freedom’s Fortress,” as any southern slave who escapes to the fort is safe behind Union lines. Spencer also notes his health and that of his regiment. Health concerns hang over the army camps throughout the war.

“It [Fort Monroe] was perfectly surrounded by vessels of every description. They are bringing in forces to that place every day. It is impossible to tell the exact number of troops stationed at ‘Fortress Munroe’ but it is certain there is a great number ….

I have been sick only two days since here I’ve been. The Regt. has, previous to this time, been in very bad health; but it is now in a very good condition, some few are sick.”