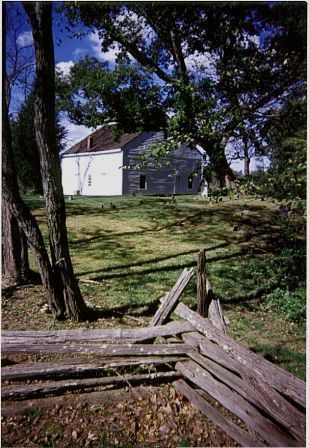 Days prior to the first major battle of the Civil War at Manassas, nearly a thousand Confederate soldiers are encamped on the grounds of Virginia’s Frying Pan Baptist Church.

Confederate soldier J.W. Reid, with the Fourth Regiment of the South Carolina Volunteers, sitting on the church grounds, writes a letter declaring that “I do not like the place at all.” Reid’s unease is not because of the church, but rather a fear that the enemy is close by.

A report that evening confirms Reid’s fears: twenty thousand Union soldiers are nearby. The call to prepare for action is given, and “each man drew forty-five rounds of cartridges, and had everything in wagons ready for an emergency.”

A picket is sent out, but the enemy is not sighted. But the next day, news arrives that two regiments attempting to reach the Baptist meeting house were intercepted by Union forces and retreated toward Manassas Junction. Following this news, the Fourth Regiment is ordered to move out.