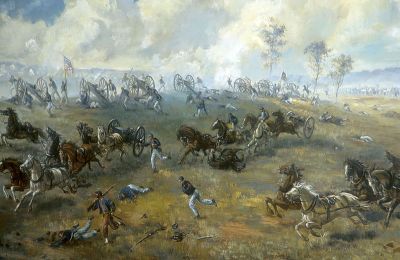 Christian Nationalism abounds among Baptists of the South, a people of faith whose heritage of church state separation makes for an uneasy alliance with the Confederacy. Samuel Boykin, editor of Georgia Baptists’ Christian Index, is but one of many Baptists who put aside faith heritage in order to proclaim the Confederate States of America as God’s chosen nation. Victory at Manassas reinforces the Confederacy’s righteousness:

“Every Southern heart should be lifted up in most devout gratitude to Him, through whom we are ‘more than conquerors.’ He nerved the hearts and strengthened the arms of our soldiers. – He was the Commander in chief, whose unerring wisdom directed our officers. It was He who confused the counsels of our enemies, and disappointed their murderous purposes. He it was who gave them the spirit of fear, and caused them to flee before our embattled hosts, leaving thousand to welter in their blood.”

Yet certain responsibilities are required of Christians within God’s Southern Confederacy:

“‘Oh that my people had hearkened unto me and Israel had walked in my ways! I should soon have subdued their enemies, and turned my hand against their adversaries.’ – Psalm 81: 13, 14.

If the Southern Confederacy is ever overcome by its Northern invaders, its inhabitants can blame no one but themselves; nay, we will go farther and say that the blame will rest upon the CHRISTIANS of our land. Let the christians forget their God and neglect to walk in his ways; – and as sure as God has hitherto protected us and blessed our arms, so sure will he bring defeat upon our soldiers. It is no trifling thing, christians, for you to slight the will of the Almighty at this time and to fail in the performance of your christian duties. The weal of a nation, the defeat of our enemies, that alliance of the Almighty with us and against our adversaries rest upon your faithfulness as christians. O wake up to every duty! Let there be ‘no strange God in thee,’ as lust, or covetousness or worldliness or slothfulness, neither ‘worship any strange God.’ But let an earnest, devout, working piety rule in your hearts, that will prove your love to God, your dependence upon him, and your fervent desire to please him. Neglect not your missions, your Sabbath Schools, your prayer-meetings, your private devotions, nor any of the means by which you may grow in grace and gain God’s favor. Especially remember the Sabbath to keep it holy, for God punishes a nation quicker for desecrating his holy day, than for aught else. And above all, remember that the Lord has but to turn his hand and our adversaries will be subdued, and pray to him with all the fervor of which your hearts are capable, for his favor and for the success of our arms.”

Slavery, of course, does not make the list as of one the South’s sins. And despite Boykin’s claim that “every Southern heart” should be grateful for Confederate victories on the battlefield, slaves who are members of Baptist churches disagree.

Source: “The Late Victory at Manassas” and “If we are Defeated, whose Fault will it be?”, Christian Index, July 31, 1861; Summary of the First Battle of Manassas / Bull Run and painting (link);