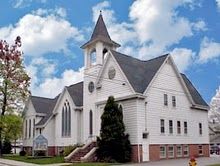 Patriots in Attleboro, Massachusetts gather at the First Baptist Church (founded in 1817) to prepare themselves spiritually before marching off to war.

The volunteer soldiers have been training for weeks on the Baptist Common, in front of the Baptist church between Park and North Washington streets.

Today is Sunday. The men, Company I of the 7th Massachusetts Volunteers, attend a service at the First Baptist Church. Rev. J.F. Ashley, the Captain of the Company, delivers the sermon. As did other Northern Baptist preachers in the first year of the war, Ashley probably exhorts the soldiers to fight for the freedom of all Americans as befitting their loyalty to the Union and to Christ.

On Monday morning the men gather again on Baptist Common, and this time march out of town to join their regiment and prepare for looming battles.