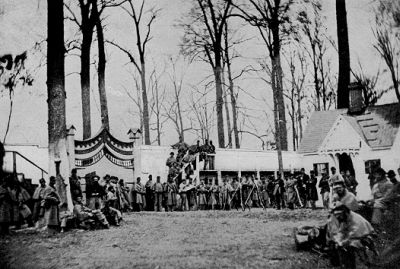 John A. Abbott, a Baptist from Dearborn, Indiana, at the age of 21 enlists in Company I, Thirteenth Indiana Infantry. His military service under Union Major General George B. McClelland takes him throughout the South, engaging in numerous battles large and small. Discharged from the army on June 1, 1864, Abbott soon re-enlists at Washington, D.C. in Company B and serves in the city from January 1865 to the end of the war, witness to “demonstrations of joy over the fall of Richmond and surrender of Lee, and of sorrow over the assassination of Mr. Lincoln.”

As do many northern soldiers who survive the war, Abbott returns to his home state and sets out to remake his life. Training for and practicing law does not satisfy, however, and Abbott enters the newspaper business in Lebanon, Indiana in 1873. A period of financial depression bankrupts him, however, and he returns to law in 1879, and is appointed as Judge of the Boone Circuit Court in 1888.

A Free Will Baptist (by virtue of his parent’s affiliation) in his early years, by his latter years Abbott is a missionary Baptist.