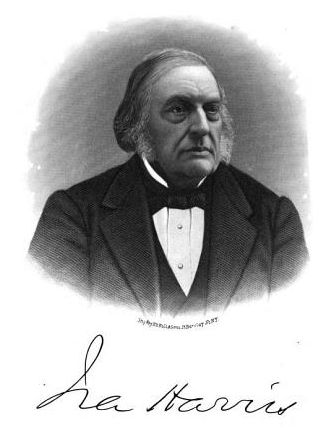 Senator Harris, of New-York, has been here for several days, and is looking in much better health than during the last session of Congress.

New York Senator Ira Harris (1802-1875) is one of President Lincoln’s “most frequent evening visitors,” a reference both to the Senator’s friendship with Lincoln and his frequent efforts in seeking favors from the president. While not among the Senate’s most important figures, Harris remains friends with President and Mrs. Lincoln throughout Lincoln’s presidency. It is to Harris early in Lincoln’s presidency that the commander-in-chief confides to having never read an entire novel. And Harris plays a role in the last day of Lincoln’s life:

Harris’s son William was a colonel in the Army Ordnance Department. Harris’ daughter Clara and her fiancé Major Henry Rathbone, who was Harris’ stepson, were the Lincolns’ guests for the theater on the night of April 14, 1865. The Lincolns were late in picking up the couple at the Harris residence and late arriving at the theater. “The beautiful weather of the morning had given way to fog as the presidential carriage turned out of the White House gates,” wrote biographer Benjamin Thomas. “Gas jets on the street corners glimmered faintly through the mist. The sodden air muffled the horses hoofbeats. At half past eight Charles Forbes, the White House coachman, drew rein in front of Ford’s Theater.’ The Lincolns were alone with their guests when John Wilkes Booth entered their box at the Ford Theater and assassinated the President. Clara Harris subsequently married Rathbone. Tragically, her husband later went insane and killed her.

Ira Harris is also a prominent Baptist. A member of the Emmanuel Baptist Church of Albany, New York, from 1850 to 1859 he serves as chairman of the board of managers of the American Baptist Missionary Union. “The board meetings under his presidency were admirably conducted. His imposing presence commanded respect, which his gentle considerateness of manner and speech made it very easy to render.” During the war years while serving as a U.S. Senator, Harris holds the position of president of the ABMU. In addition, he is a trustee of both Vassar College and the University of Rochester, and of the latter “chancellor from its foundation to his death.”

Following his death and attesting to his prominence both as a civic and Christian leader, a collection of memorials to Harris is published in book volume.