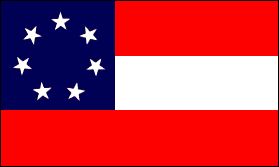 A mere twenty-four hours after Abraham Lincoln takes the U. S. presidential oath, the Confederate States of America, disdainful of the “black” U. S. president (as they call Lincoln), unveils the “Stars and Bars,” the first Confederate flag, while Texas formally accepts Confederate statehood.

White Baptist reaction in the South is mixed. While Basil Manly, Sr., chaplain to the Confederacy, celebrates in Montgomery, Alabama, Texas governor and Union supporter Sam Houston knows his days as governor are numbered. And while Georgia governor Joseph Brown is busy building up his state’s militia, Baptists at large in Georgia are divided, with many in the mountainous north and piney woods south less than fully-enthusiastic about the war that now seems inevitable.

President Lincoln, a former Baptist, contemplates the situation his election has wrought. Informed by Union Major Robert Anderson that Fort Sumter near Charleston, South Carolina, has only a few weeks of provisions, Lincoln realizes that surrender of the fort would strike a blow to U. S. sovereignty, yet sending supplies would almost certainly lead to open war.

At the same time, Confederate President Jefferson Davis informs the president of the Confederate Congress (a man known to frequent Baptist pews but who dies without ever joining a church) regarding the financing needed to raise a Confederate Army:

Sir: Herewith I have the honor to transmit the estimate of the Secretary of War of the amount required for the support of the Army of the Confederate States, also, of that requisite for the support of a portion of the provisional army, authorized to be raised.

The estimate, it will be observed, is for the authorized strength of the army, and as a large portion of that force will probably not be enlisted or commissioned, there will be a balance of appropriation which, if permitted, might be used to support additional troops of a provisional army, a character of force which may be more speedily raised, and on which we must, in any early necessity, expect mainly to rely.