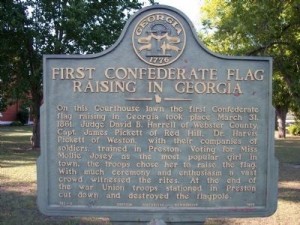 On this Sunday, the first Confederate flag is raised in Georgia, on the courthouse lawn in the town of Preston.

According to a historical marker in Preston:

Judge David B. Harrell of Webster County, Capt. James Pickett of Red Hill, Dr. Harvis Pickett of Weston, with their companies of soldiers, trained in Preston. Voting for Miss Mollie Josey as the most popular girl in town, the troops chose her to raise the flag. With much ceremony and enthusiasm a vast crowd witnessed the rites. At the end of the war Union troops stationed in Preston cut down and destroyed the flagpole.

The following account tells of how Mollie (or Molly) Jossey (or Josey) was selected to raise the flag:

At the very beginning of the War Between the States, three companies of soldiers were sent to Preston for three months training, camping around the school building…A group of ladies from Atlanta were returning to Atlanta by train on the night of March 4. They sat up all night sewing on a flag which was the Stars and Bars. The train stopped at Fairburn the morning of the 5th and the Stars and Bars were displayed on a staff for the first time in Georgia…It was decided to place a 60 foot flag pole on the courthouse lawn from which to fly the Confederate flag to show their loyalty to the Confederacy. In order to select the young lady who would hoist the flag for the first time, votes would be cast as to which was the most popular girl in Preston. There were three girls (one chosen by each company) in the contest, who had been very active in collecting food for the soldiers. They were Misses Mollie Jossey, Mollie Swinney and Mollie Knox–three Mollies. Much excitement reigned and after the 600 some odd votes were cast it was found that the winner was Miss Molly Jossey.”

And the following unverified story notes the Baptist connection to the flag raising in Preston:

When the First National flag reached Preston it was raised proudly on a 60ft flagpole receiving cheers and applause from the soldiers and the families. The soldiers then marched north of town to Shiloh-Marion Baptist Church and ate barbeque, enjoyed fellowship and some were baptized in a pool which is still there. Then they marched off to serve their Southern Country.