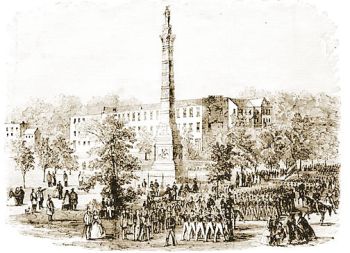 Today is the second day of the bi-annual meeting of the Southern Baptist Convention held at the First Baptist Church of Savannah, Georgia. The day’s events begin with a reading of Psalm 71 (link), a scriptural passage that invokes God’s wrath against the enemies of righteousness. The passage is applied to the United States and reads in part: “Deliver me, O my God, out of the hand of the wicked, out of the hand of the unrighteous and cruel man … Let them be confounded and consumed that are adversaries to my soul; let them be covered with reproach and dishonour that seek my hurt …” (KJV)

Afterwards, delegates listen to a report of the Domestic Missions board, delivered by well-known Baptist leader Basil Manly of Alabama, chaplain of the Confederacy. The funding and work of the mission board is in decline,

“in consequence of the short crops of the past season throughout the Southern country; and the unhappy national agitations that have so entirely engrossed the minds of our people.”

Manly also reports on the decline of the Foreign Mission Board in the face of the war. Following the mission board reports, “the committee on the State of the Country asked and obtained leave to retire” to work on a resolution concerning the Confederacy.