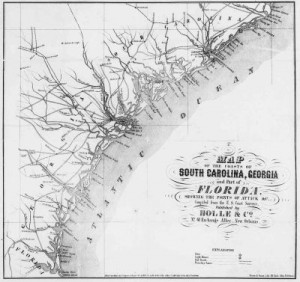 Some Baptist associations hold their annual meetings in November, as does the Barnwell Baptist Association of South Carolina.

In the state where the Confederacy was birthed, Christian nationalism is common among these Baptists living along the South Carolina coast. Meeting on Saturday, Barnwell Baptists, seemingly due to the readiness of some men to march off to war, cut short the annual session. Unlike years past, no devotional hour takes place and the Lord’s Supper is not observed.

Officers report of a year of “unusual difficulties and severe trial for the work committed to their trust.” Contributions from local churches are less than half of the previous year. Baptisms in churches are only about one-sixth from the year before. Sales of religious literature have plummeted. The Committee on Sabbath Schools has been dissolved.

And yet, Confederate patriotism in the name of Christ floods through the veins of these southerners, voiced in the following resolution:

“Resolved, That the hour from 10 to 11 o’clock A. M. on to-morrow be set apart for the offering at a throne of mercy, our earnest and solemn supplications in behalf of our bleeding country and those of our friends who are exposed to dangers, trials and sufferings in defense of our country’s rights, and that we earnestly request all Christians present to unite with us in our supplication.”

The downward trajectory of Baptist work and the open worries for the newly-birthed nation come at a time when the Confederacy has won all the major battles, and most minor battles, yet fought. These early concerns foreshadow the ultimate fate of the nation birthed to defend white supremacy and African slavery (typically voiced in the phrase of the South’s “rights”).