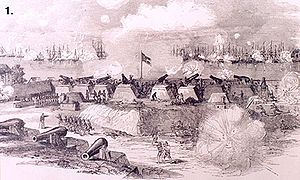 One of the most important offenses of the autumn season is unfolding off the coast of South Carolina near the Georgia state line. A United States Navy fleet and Army expeditionary force has been stationed off the mouth of Port Royal Sound for the past two days. Until today, bad weather has prevented the Union forces from further advancing the mission of dismantling Confederate navy vessels near Charleston and Savannah. Strategically, coastal control of these two Confederate cities will further restrict Confederate commerce and force Confederates to maintain troops in the Deep South in order to protect coastlines.

Fort Walker on Hilton Head Island to the south and Fort Beauregard on Phillip’s Island to the north, supported by four gunboats, guard Port Royal. For now, the bad weather yet holds the Union fleet at bay. Some Union vessels advance into the harbor today to feel out Confederate firepower, resulting in ship to shore bombardments, as well as retaliatory fire from the Confederate forces on shore. The Union fleet is vastly superior to the few Confederate vessels guarding the sound, as the Union fleet commander bides his time.

The unfolding coastal drama sends dread throughout South Carolina and Georgia. White Georgians in particular are nervous, knowing how vulnerable Savannah is to the superior Navy fleet. Black Georgians in Savannah, on the other hand, await in anticipation of the advance of the Union fleet.

Julia Stanford, a young Baptist living in Forsyth, Georgia who is already worried about family and friends serving in the Confederate army in far away Virginia, voices the concerns of many Baptists of Georgia as she reflects on rumors that the Union fleet has reached Savannah:

News has come of the enemy’s fleet being at Savannah. Sad news for Georgia. Most persons think it a faint movement and that the enemy’s intention is to get into South Carolina. A few days however will develope their designs … War how awful! So many thousand must die! So many graves be filled! And all to gratify the depraved Ambition of a despot! So awful yet it must be –

It will be months before Union forces secure control of Savannah’s coast, and not until December 1864 will the port city fall to Union troops. But today, panic spreads throughout the state.

Sources: “The Diary of Miss Julia A. Stanford” (A copy is available in the Mercer University Georgia Baptist History Depository, Macon, Georgia); Battle of Port Royal, and image (link)