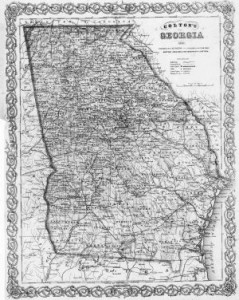 Against the backdrop of the war, many Baptist churches in the South hold monthly business meetings this last weekend of the month. Among such congregations is the Greensboro First Baptist Church of Greene County, Georgia.

Representative of many Baptist congregations of the Confederacy, Greensboro First in their business session goes through a series of procedures that has become rather ritualistic in the life of Baptists of the South. Following a sermon, the congregation turns to issues of membership. At this juncture, members are voted in and/or out of the congregation. In this instance, no one is accepted into membership, while one person is “dismissed,” a term referring to the amiable departure of a member. As is the custom, a “letter of dismissal” (stating one’s standing in the good graces of his or her now-former church) is granted to the person departing, in this case, to “Cynthia, servant of Mr. J. H. Willey.”

The briefness of this notation reveals volumes about church life in the South at this time. Slave members – Baptist congregations at this time are integrated, although slaves sit apart from whites in the sanctuary and do not have a meaningful voice in the life of the congregation – are referred to by first name only, typically as property of their owners. Church records typically use the word “property,” a term sometimes enjoined with the word “slave,” and in other cases (such as the Greensboro congregation) paired with the word “servant.” There is, accordingly, a certain sensitivity on the part of some white Baptists as to how chattel are referenced. Typically, usage of the word “servant” reflects a conscious attempt to portray African slavery in a less harsh manner. Slave members, however, have no voice in the manner to which they are referred. Nor are they fully autonomous in deciding where they will attend church, their religious activities (apart from within their own slave quarters) taking place at the will of, or at least by permission of, their owners.

Following membership issues, committees, if needed, are appointed to deal with issues of discipline (not so this month within the Greensboro Church), the calling or salarying of pastors (Greensboro appoints a committee of three “to decide what salary shall be paid our pastor for 1862), or other particular matters.

And thus, week to week and month to month, life goes on at this time for many Baptist churches in areas of the South distant from troop movements and battlefield events. Yet in addition to the absence of many male members, subtle transitions are taking place even in these very congregations: racial tensions are on the rise, more responsibilities (apart from preaching!) are falling upon women members, and money to pay the preacher and support mission work is becoming scarce.

Far more difficult days, however, yet lie ahead for Baptists of the Confederacy.