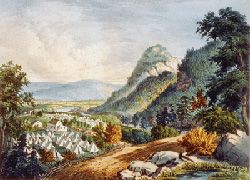 In Virginia’s northern Shenandoah Valley, German Baptists are rebelling against a proclamation from Virginia governor John Fletcher incorporating the state’s militia into the Confederate Army.

The proclamation is in response to a desperate need for more Confederate manpower in the face of recent Union victories. Confederate General Thomas “Stonewall” Jackson, ready to ramp up efforts to push Union forces out of the Shenandoah Valley, eagerly anticipates the new recruits.

Many Virginians, however, having served one term of military service with the Confederate Army, have little interest in reenlisting. Others were never interested in fighting. The stiffest resistance to the governor’s proclamation takes place in Rockingham County, home to many German Baptists, a pacifist sect. The Dunkards, as they are also known, refuse to serve or even provide substitutes. Jackson offers the German Baptists an opportunity to serve as teamsters, an offer that few accept.

Fearful that Jackson will try to compel them by force, the Baptist men and other resisters are holed up deep in Virginia’s wooded Blue Ridge Mountains at Swift Run Gap. As anticipated, Jackson pursues the dissenters, sending Lieutenant Colonel John R. Jones and the 33rd Virginia to compel compliance. For several days now, the 33rd Virginia has been shelling the holdouts, who are armed only with shotguns and “squirrel rifles.”

The outcome of this mismatched skirmish is already clear to all. Resistance is proving futile. Some have already surrendered, and within a matter of days the German Baptists and their allies are forced into submission to the Confederate States of America. Pressed into military service, many German Baptists perform tasks not requiring the bearing of arms. Others simply refuse to serve, even to the point of imprisonment.

The South, in reality, is far from unified in fighting against the North. As the war progresses and in increasing numbers, other southern white men — particularly common folk who have no interest in risking their lives and families to preserve African slavery for the benefit of planters — resist army service, especially from 1863 into the spring of 1865. Many serve prison time, some are executed as traitors, and still others manage to elude capture. The resistance movements, taken as a whole, contribute to the waning of national will on the part of the Confederacy in the second half of the war.