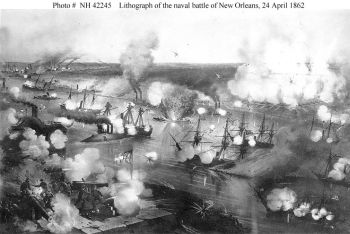 Confederate citizens and soldiers watch in dismay as a Union naval squadron, led by Flag-Officer David G. Farragut, today sails up the mouth of the Mississippi past forts Jackson and St. Philip. The fall of New Orleans is inevitable; surrender takes place on April 28. Union occupancy of the Confederacy’s largest city begins May 1, as General Benjamin Franklin Butler’s army embarks.

Union officers and soldiers are aware of the Baptist presence in the South. One day after setting foot in New Orleans, a Union soldiers’ news publication based at Ship Island, Mississippi — the News-Letter Extra — prints a letter (dated four days prior) from Farragut to the mayor (unnamed) of New Orleans demanding that the Louisiana flag, then flying over the courthouse, be removed and the U.S. flag be raised (Union forces had earlier replaced the Louisiana flag with the U.S. flag, but locals had since torn it down and returned their state flag atop the courthouse). Alongside Farragut’s letter is a reprint of an article from a recent edition of Virginia Baptists’ Religious Herald. In this instance, the Union newspaper staff congratulates the Baptist paper for publishing such a frank assessment concerning the war.

We give [to you] an article from the columns of the Religious Herald, a Baptist newspaper in Richmond, Va. It shows so much more of the coolness of judgment and candor of mind than we are in the habit of finding in our Southern exchanges, that we deem it worthy of special notice. It says the South has made at least eight great blunders, and enumerates them as follows:

2. In believing that there would be a divided North, and an apathetic Federal Government.

3. In believing that they would have the hearty sympathies of Europe.

4. In believing that the bonds of their Confederacy would readily be taken in Europe.

5. In believing that the military power of the North would be directed in a crusade against slavery, rather than employed for the overthrow of treason, and the establishment of the Union and Constitution.

6. In believing that Northern courage and physique were no match for Southern: or that in battle one Southernor equaled five Yankees.

7. In believing that the flag of the Cotton Oligarchy would wave above the Capitol at Washington, and the roll of slaves be called on Bunker Hill.

8. In believing that the fancied omnipotence of Cotton would dominate the commerce of the world.