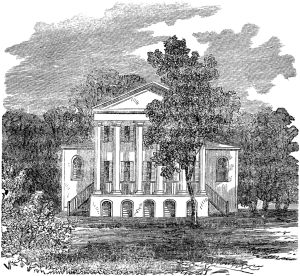 Numerous Southern Baptist opinion shapers are now doing their best to establish love of money as the Confederacy’s national sin. Insisting that a retreat from the evil of greed will allow God to cut short his chastisement of their Christian nation–currently expressed in the surprisingly prolonged nature of their war with the abolitionist North–and effect a great and providential victory for the Confederacy, these Baptist elites develop their theme further with each passing month.

Readers of this month’s South Carolina Confederate Baptist and North Carolina Baptists’ Biblical Recorder are treated to one of the latest wealth-bashing essays.

If we inquire into the cause of extortion, and seek to ascertain what is the great inciter of this mal practice in trading, we find it to be intense desire for wealth. And if we go a step further back, and ask, why this intense desire for wealth, we discover its primal source in an unhealthy public opinion, which reveals its existence in the indiscriminate respect paid to wealth. The community at large, is, therefore, to a great extent, responsible for the origin and growth of this portentous evil.

To be distinguished from the common herd–to be somebody–to make a name and acquire a position in the world, this is the universal ambition; and a slight observation teaches us that the accumulation of riches is the surest and the easiest of way of fulfilling this ambition. The lesson is learned very early in life. At school, the court paid to the boy who is well dressed and has plenty of money to spend, contrasts painfully with the neglect of the poor lad, whose patched and threadbare garments indicate the small means of his family; and the latter has burnt into his memory the fact that poverty is contemptible. He may have read in his books much lofty declamation about the nobility of self-sacrifice, the reverence due to genius, the sublime elevation of unspotted integrity and may have felt his youthful enthusiasm kindle over the pages which record the virtues of an Aristides and a Themistoces [Themistocles], a Dentatus and a Regulus; but on entering the world, the lessons of his boyhood are quickly neutralized by his own experience. The conduct of the mass of mankind, convinces him that these are not their standards of respect. He begins to think that only hair-brained poets condemned wealth as “the toil of fools, the wise man’s cumbrance;” and that, after all, the devil’s advice to our Saviour, in Paradise Regained, was the most sensible and practical.

“Money brings honor, friends, conquest and realms.
Therefore, if at great things thou would’st arrive,
Get riches first, get wealth, and treasure heap.
They whom I favor thrive in wealth, amain,
While virtue, valor, wisdom sit and want”

The evil, then, under which our country is now suffering, lies deeper than appears, and draws its chief autriment from the homage which is paid to wealth. Ignoring the Scripture estisetiment [chastisement] of riches, and enthroning mammon in the chief places of concourse–nay, even erecting his altar on our very hearthstones–we have turned aside to a vain idolatry. The young grow up, surrounded by the influences of this species of fetish-worship. From early childhood, the sayings and doings of all around them, have generated the idea that wealth and respectability are identical–that to be poor is to be mean and disreputable. This idea, acquiring strength by every day’s experience, becomes at last, what one may call, an organic conviction. And this organic conviction it is which prompts the expenditure of all our energies in money-making. The chief stimulus is not the desire for wealth itself, but for the applause and position which it brings.–Money is regarded by them as a means, not an end. It is only the blind and besotted miser who thus reverses the order of nature and seeks wealth for its own sake. Who would undergo the labor and anxiety which are the price of successful trade, merely to inhabit a stately mansion, to own rich wines and ride in a splendid carriage? It is because his stately mansion and delicious wines bring him increased social consideration, his carriage gives his family eclat, and these external symbols of opulence secure to him the greetings in the market place, and respectful deference in the public assembly, that he makes sacrifices of all ease and comfort, and assumes all his additional anxieties. If these are the facts, then is the unavoidable conclusion that the blind admiration of the mass of socity [society] for mere wealth, and the display of wealth, is the chief source of the multitudinous immoralities which vitiate the business transactions of men with one another.

This gigantic evil, branching out into every conceivable form of fraud, has struck its roots underneath our whole social fabric, and sent its fibres into every house, sucking up strength from our ordinary sentiments and action.–Its Shibboleth is heard in every drawingroom, and along every way side.–Gentility has become synonymous with expense. The “substantial citizen” is the rich citizen. Rich silks, dresses that contain an enormous quantity of material, laces that are made by hand, diamonds, old china–all these are deemed genteel, because they are costly. A carriage is valued chiefly for its respectability, and some people think it vulgar to walk to church.–Amid such influences the young are brought up, and they are more efficient educators than books or preachers.

If, therefore, we would restrain the desire of wealth, and its most fatal outgrowth, extortion, we must eradicate the roots from which it draws its daily pabulum; and this can be done only by rectifying public opinion, and thus disenchanting it of its insane admiration of mere wealth, and its external signs and symbols.

The theme is a fruitful one, and we shall refer to it again.

Ironically, by placing blame on the “common” man who desires and pursues “wealth,” the writer–himself doubtlessly an elite–allows the truly wealthy to escape his volley unscathed. In denigrating the pursuit of money and casting poverty as desirable, perhaps the author takes as fools the (white) poor among his readers who yet hope to escape the agonies of poverty and deprivation? Do those living in poverty see beyond this ruse? How many can even afford to subscribe to a newspaper?

Very few white Southerners, in fact, are wealthy. Most are poor, and any real hope of wealth is beyond their grasp. Indeed, the diminishing lack of opportunity to earn a decent living in the South had led tens of thousands of Southern white men to leave the region in the decade prior to the war, relocating to the North or West in hopes of finding the means to better support their families. Why were they unable to make a living in the South? Primarily because the abundance of slave labor depressed wages for white laborers.

To be certain, however, there is great wealth in the South. The Southern states of the Confederacy, under the political control and financial sway of many of North America’s richest men–large slaveowners–are warring against the United States in order to preserve the tremendous private wealth of the aristocratic planter class, riches amassed from the labors of millions of African slaves. Southern poor white men, by contrast, fight for the survival of a nation that offers little more to them than menial soldier’s pay, the promise that they (because of the color of their skin) will never be enslaved, and the ever distant possibility that one day they too might own African slaves (and thus have a shot at wealth and social respectability).

Prior to the war, the South’s biggest slaveowners comprised the great majority of the nation’s millionaires (such men totaling somewhere between 100 and 300 in number, dependent upon the measurement of assets), their riches resulting in the twelve most wealthy counties in the pre-war U.S. being in the South.

The massive wealth of the South is thus largely controlled by a relative handful of families, generated by and dependent upon African slavery, representing the very ethos of the slave-based Confederacy. Yet these wealthy slave-owning families receive no criticism from the writer, who instead singles out–in essence–(mostly) middle class business owners, a small percentage of men who make their living buying and selling food stuffs and goods. While some Southern businessmen do attain riches, and are now taking advantage of their customers in a time of national crisis, many are merchants who rarely attain enough wealth to live in mansions. Even now many are sinking within a collapsed Confederate economy characterized by a scarcity of both food and goods against the backdrop of escalating inflation.

To truly conquer the demons of wealth and greed in the South, as the writer urges, would necessarily demand the abolishment of slavery, the very economic engine and cultural identity of the Confederacy. Yet the cherished practice of African slavery, now enshrined as the very will of God, is the one ideology which the writer, and other Southern Baptist elites, refuse to relinquish.