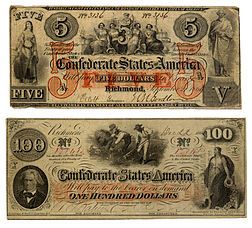 Extortion, extortion, extortion. Southern Baptist opinion-shapers hammer home, week after week, the narrative of extortion as the sin of the Confederacy–a sin that is delaying inevitable victory over the United States. For the Confederacy to collect on God’s promise to carry his chosen people to victory, greed in the South must first be eradicated. Some editorials place the blame on the South’s poor whites striving for riches, and many focus on the merchant class, yet no one dares blame those who for years have been reaping the greatest of profits, and for whose benefit the war is ultimately being fought–large slaveowners.

An editorial in the current edition of North Carolina Baptists’ Biblical Recorder blames the usual suspect for the Confederacy’s sorrows.

The word “extortion” is composed of two Latin words–the preposition “ex” which means “out of,” and the verb “torqueo” meaning “to twist.” The compound idea involved is that of WRENCHING or obtaining by force what could not otherwise be gotten OUT of another. The sin does not consist in the high price asked for an article. Price must vary with the proportion between supply and demand. There are fixed laws in accordance with which all the operations of trade are carried on. One of these is that as the stock on hand diminishes in quantity–the demand remaining the same or increasing–prices go up. And they are generally held guiltless who operate in accordance with this law. As this is perhaps the only important error which we may commit in forming an estimate of this acknowledged sin,–we pass over all others and come directly to show in what it does consist.

We feel assured that the essential idea of force or violence employed by the seller is that which leads us to condemn every act of extortion. We may grumble at high prices, and abuse him who asks them, but self love will lead us to do this even when extortion is not practiced. We may all the while feel that circumstances over which man has no control have disturbed the equilibrium between supply and demand, and on reflection retract all that we may have said abusively of the seller.

But when we are sensible that through the agency of the party holding the article for sale the price has been enhanced, our estimate of the act is considerably modified.–If we are convinced that not only natural or providential causes have tended to produce the exaggerated price, but that human wit has also concurred to this end, then we feel that there is sin committed. Wherever, in a word, we perceive human agency at work in creating artificial value, then we feel that extortion is being practiced. Whenever the seller so avails himself of his power to control the market that for articles which the buyer must have, he manages to “twist” “out of” him a price which the proportion between supply and demand does not warrant, we have a clear case of extortion. And the remotest intention to do this is enough to convict the party concerned at the bar of God, where “extortioners, covetous, drunkards, thieves”, &c, are presented in one common bill of indictment.

Of course there are circumstances which aggravate the guilt of extortion. Sometimes it takes the shape of millstones “grinding” the poor. The heartless wretch who commits it lies in wait for the starving, the naked, the helpless, and grinds them to powder.

Again, when the land is distressed in every interest, when the noise of war is heard through all her borders, and blood is flowing from ten thousand wounds, this child of the devil applies to each of its ten thousand wounds a cupping glass, and opens fresh ones that the patient may the more certainly die. The simple “forceps” or even the barbarous “key” represents too feebly the act of him who, when his country lies prostrate and her noblest sons are dying for her, comes out from his lurking place and in the light of heaven applies the appropriate machinery for wrenching from widows and orphans their “little all”, leaving them to a condition of destitution and despair worse than death itself. (Read Nehemiah, 5th chapter.) But we must close for the present.