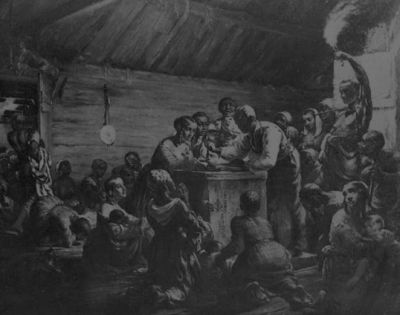 Candles burn late into the night, signifying the coming of a new era in American history: “freedom’s eve,” the beginning of the exodus story of African slaves. Northern free blacks and abolitionists, as well as thousands of freedmen in Union-controlled areas of the South, unable to sleep in anticipation of the morrow’s Emancipation Proclamation, gather in churches and homes to count down the hours and minutes to the legal liberation of slaves in the Confederacy. For their part, many enslaved blacks (including members of the First African Baptist Church of Savannah) quietly celebrate, not wanting to alert their masters (who have no intention of complying with Abraham Lincoln‘s proclamation), but daring to believe that their salvation is nigh.

As Lincoln prepares to sign the Emancipation Proclamation, the narrative of the war is poised to change. To date, everyone North and South acknowledges African slavery as the cause of and reason for the war, while Lincoln has assuaged Northern anti-war Democrats by publicly framing the conflict as a fight to preserve the United States. But with the stroke of a pen soon expected, the war will officially become a fight for human freedom and liberation. Upon the signing of the Proclamation, the Union Army will begin a systematic effort to free slaves within the Confederacy. The U.S. government will soon print pocket guides of the Emancipation Proclamation for Union soldiers to distribute among Southern slaves.

Tonight, in dozens of Baptist churches across the North and Union-controlled South, congregations white and black await with mounting excitement for the moment a new Moses will free millions of enslaved persons. This “watch night” will be forever remembered and celebrated by African Americans as the hour of God’s deliverance.

In a contraband (freedmens) camp on the outskirts of the nation’s capital, a former slave rejoices at freedom’s coming:

Among those gathered, there is much singing. New lines are added to an old biblical song:

Go down, Abraham,
Away down in Dixie’s land
Tell Jeff Davis
To let my people go.