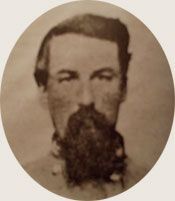 Today a Captain within the 2nd North Carolina Cavalry resigns. A wealthy lawyer, author and Baptist layman, John Wheeler Moore (1833-1906) resigns his position in order to accept a promotion as a major of a new artillery battalion, the 3rd Battalion NCLA near Raleigh, of which he is given command by Governor Vance on February 24. For the remainder of the war, Moore serves in the defense of Richmond, Goldsboro, New Bern, and Wilmington. He also fights in the Battle of Bentonville. At the close of the war, he surrenders at Greensboro.

Moore’s larger story is one of wealth and southern privilege, as well as personal achievement and an enduring Baptist faith. Born into a slave-holding family, as a young man he pursued education, unencumbered by manual labor. Graduating from the University of North Carolina, he married Ann James Ward (1834-1901) in 1853. Ward was the first graduate of Chowan College, an institution founded largely with the financial backing of Moore’s father, Godwin C. Moore, a doctor, politician, and prominent Baptist.

From his boyhood through the war, Moore was attended to by Harvey, a young slave who had been given to him by Moore’s father as a body servant. Family history relates how Harvey went to the university with Moore, who, while studying law, taught his servant. Following the defeat of the South, Moore did not have the funds to support the now-emancipated Harvey. At Moore’s suggestion, Harvey moved North to seek work, where he became a successful lawyer in Philadelphia. The Moore’s other slaves also left to seek their own fortunes, most settling in nearby towns, and a few returning to work in the employment of the Moores.

For their part, John and Ann Moore were forced to sell off much of their large plantation, eventually retaining 800 acres. While their post-war finances did not match their pre-war affluence (circumstances shared by almost all post-war southern elites), they were financially secure enough for John to spend the remainder of his years in scholarly and writing pursuits, particularly in the field of history.

In addition, John Moore delved into the history of North Carolina Baptists, spending the last years of his life working on a history of the state’s Baptists. The manuscript, never published, was entitled Rise and Progress of the Baptist Faith in North Carolina, 1663-1894.

In the post-war years, Moore also taught the men’s Bible Class at Bethlehem Baptist Church, where he remained a popular teacher until his death.