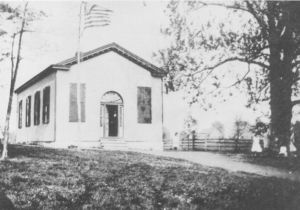 The Oak Ridge Baptist Church of Kenton County, Kentucky, meets today for the congregation’s monthly business session. A later-published history of the church summarizes the meeting:

Bro. A. W. Mullins was chosen pastor for one year.

Permission was granted to a sister, by a vote of the church, to appeal to the law when necessary to the conduct of her business.

The brief notations offer a glimpse into the life of rural churches in the Southern and Border states during the Civil War. Pastors often serve for only a year at a time, by vote of the congregation. Some pastors are elected year after year, while in other congregations, a different pastor is often chosen from year to year. Frequently, rural Baptist churches turn to different men within their own congregations to serve in the pulpit. In some instances, circuit-riding pastors serve multiple congregations, as many as three or four simultaneously, one per week.

During the Civil War years, women, as had been the case since the Revolutionary war era, are considered inferior to men within congregations. The somewhat cryptic reference to a “sister” and her “business” may reflect an unusual instance of a female member owning her own business at the time. Even so, it seems, she is required to gain approval from the congregation in matters of resolving business issues. The permission granted to the unknown sister apparently has to do with business relationships outside the purview of the religious realm.

Prior to the war, Baptist church minutes South and North rarely discussed the “secular” world. The Oak Ridge church’s dealings today may reflect that traditional hesitancy. In the larger perspective, however, many Baptist congregations during the war years break from tradition by discussing war-related matters.