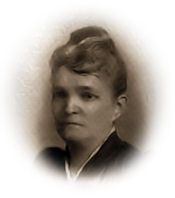 Newlyweds Anderson and Dora Richards Miller today arrive in Arkansas, seeking to escape the travails of war. Having moved from New Orleans, Arkansas is a new experience for Dora. Perhaps an Episcopalian (the church in which the couple was married), Dora in her diary describes the day and days following, including observations of religious life in the small unnamed Arkansas town that is their new home:

We reached Arkansas Landing at nightfall. Mr. Y., the planter who owns the landing, took us right up to his residence. He ushered me into a large room where a couple of candles gave a dim light, and close to them, and sewing as if on a race with time, sat Mrs. Y. and a little negro girl, who was so black and sat so stiff and straight she looked like an ebony image. This was a large plantation; the Y.’s knew H. very well, and were very kind and cordial in their welcome and congratulations. Mrs. Y. apologized for continuing her work; the war had pushed them this year in getting the negroes clothed, and she had to sew by dim candles, as they could obtain no more oil. She asked if there were any new fashions in New Orleans.

Next morning we drove over to our home in this village. It is the county-seat, and was, till now, a good place for the practice of H.’s profession. It lies on the edge of a lovely lake. The adjacent planters count their slaves by the hundreds. Some of them live with a good deal of magnificence, using service of plate, having smoking-rooms for the gentlemen built off the house, and entertaining with great hospitality. The Baptists, Episcopalians, and Methodists hold services on alternate Sundays in the court-house. All the planters and many others, near the lake shore, keep a boat at their landing, and a raft for crossing vehicles and horses. It seemed very piquant at first, this taking our boat to go visiting, and on moonlight nights it was charming. The woods around are lovelier than those in Louisiana, though one misses the moaning of the pines. There is fine fishing and hunting, but these cotton estates are not so pleasant to visit as sugar plantations.

But nothing else has been so delightful as, one morning, my first sight of snow and a wonderful, new, white world.