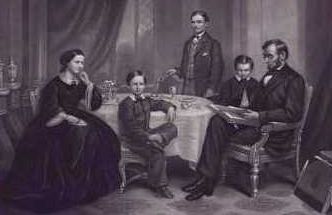 In the midst of large-scale death caused by the Civil War, the death of one boy in Washington, D.C. causes unparalleled anguish in the life of the President of the United States.

Following a period of illness, William Wallace Lincoln, the 11-year old son of Abraham and Mary Lincoln, dies at 5 PM today in the White House. The Lincolns are devastated. The President weeps bitterly, lamenting, “My poor boy, he was too good for this earth. God has called him home. I know that he is much better off in heaven, but then we loved him so. It is hard, hard to have him die!” Mary will never again set foot into the room in which her son dies. 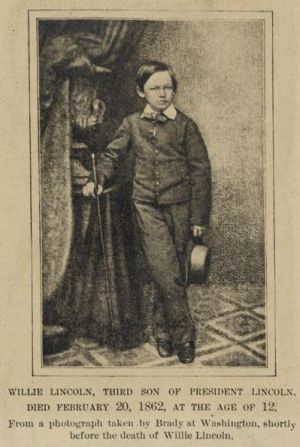 Faith has been an integral, if at times murky, part of Abraham Lincoln’s life since his early years. A Primitive Baptist in his early years, his Christian faith in later adulthood is greatly nuanced. Since moving to Washington as President of the nation, the Lincolns have attended the city’s New York Avenue Presbyterian Church — but have not joined the congregation, and never will.

The funeral service and burial of young William takes place on February 24. A fierce storm precedes the ceremonies. Generals, senators, ambassadors and soldiers join the President in the East Room of the White House. Mary Lincoln grieves privately, upstairs in her room. Dr. Phineas D. Gurley, pastor of the New York Avenue Presbyterian Church, conducts the service. Tears are shared by all present; the sight of the President crying is extremely moving, while William was beloved by White House staff and family friends. Only a week prior to his death, the boy had voiced a desire to become a Gospel minister.

The burial follows in Oak Hill Cemetery in Georgetown, William’s resting place until following his father’s assassination in 1865, after which the boy’s body is placed with that of his father in Oak Ridge Cemetery in Springfield, Illinois.

White House secretary John Hay later observes that the President “was profoundly moved by his death, though he gave no outward sign of his trouble, but kept about his work the same as ever.