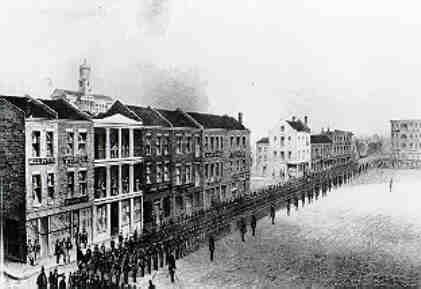 Led by U.S. officer Bull Nelson, whose army arrives at Nashville on the Cumberland River via gunboats, Union forces march into and occupy Nashville today. This afternoon, the formal surrender of the city takes place, as Nashville major Richard Cheatham hands the city over to U.S. General Don Carlos Buell. In the days and weeks following, thousands of Union soldiers march into the city, many passing through to work on fortifications to the city’s South.

Under Union occupation, life in Nashville changes dramatically for many residents. For Baptists of the city, the change is immediate, as the pastor of the First Baptist Church is arrested for preaching sedition against the United States. Seized by Union forces, church buildings are used as a hospital. The congregation struggles to stay together during Union occupation.

The last chapter in the story of Nashville and the Civil War has yet to be written, but for now the racial dynamics of Baptist life in the city have been turned on their head.