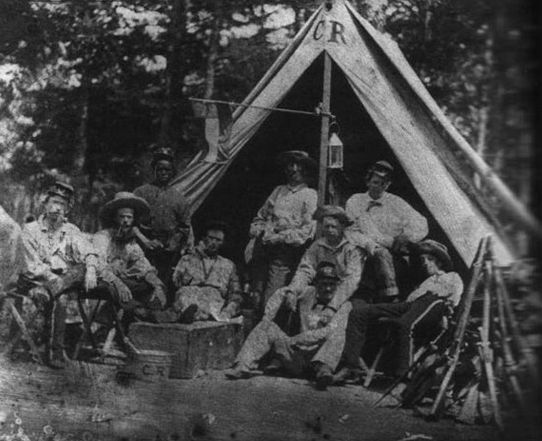 In the wake of the demoralizing setbacks of the past two weeks in Tennessee — and in acknowledgment of the recent termination of the South’s provisional government and the formal installing of a permanent Confederate government — today is a day of national prayer and thanksgiving throughout the Confederate States of America, as proclaimed by President Jefferson Davis.

To the people of the Confederate States:

The termination of the Provisional Government offers a fitting occasion again to present ourselves in humiliation, prayer and thanksgiving before that God who has safely conducted us through the first year of our National existence. We have been able to lay anew the foundations of free government and to repel the efforts of our enemies to destroy us. Law has everywhere reigned supreme, and throughout our widespread limits personal liberty and private right have been duly honored. A tone of earnest piety has pervaded our people, and the hundred victories which we have obtained over our enemies have been justly ascribed to Him who ruleth the Universe. We had hoped that the year would have closed upon a scene of continued prosperity, but it has pleased the Supreme Disposer of events to order it otherwise. We are not permitted to furnish an exception to the rule in Divine government, which has prescribed affliction as the discipline of nations as well as of individuals. Our faith and perseverance must be tested, and the chastening which seemeth grievous will, if rightly received, bring forth its appropriate fruit. It is meet and right therefore that we should repair to the only Giver of all victory, and, humbling ourselves before Him, should pray that He may strengthen our confidence in His mighty power and righteous judgment; then may we surely trust in Him that He will perform His promise and encompass us as with a shield. In this trust and to this end, I, Jefferson Davis, President of the Confederate States, do hereby set apart Friday, the twenty-eighth day of February, instant, as a day of Fasting, Humiliation and Prayer; and I do publicly invite the Reverend Clergy, and people of the Confederate States, to appear at their respective places of worship, to humble themselves before Almighty God in prayer for His protection and favor to our beloved country, and that we may be saved from our enemies and from the hands of all that hate us.

Given under my hand and the Seal of the Confederate States, at Richmond, this twentieth day of February, A.D., 1862, by the President,

Davis’ Christian nationalist rhetoric is not dissimilar to that of many Southern Baptists. Many Baptist churches of the South heed their President’s words and set aside the day for prayer and thanksgiving. Yet some do not, refusing to recognize the right of the government to tell churches what to do.

Christian nationalistic sentiment, nonetheless, is rampant among white Southern Baptists.  An editorial in this week’s Baptist press is one of many such voices:

One of our ingenious military friends thinks the colporteurs are doing great harm in our army by circulating terrible tracts in the camps, and, on the eve of expected battles, confronting our men with little pamphlets entitled, “Are you ready to die?” “Sinner, you are soon to be damned,” & etc.–This is more than a mistake. The best stimulation of courage and endurance in an army is to be found in an inculcation of Christian spirit among the men. With more religion in our camps, we will have less drunkenness, less dissatisfaction, less grumbling, and a courage which becomes invincible, as it refined by the pure and holy spirit of religious convictions. An army stands as much in need of moral and religious education as any equal number of men composing a social community; and the colportorus are doing a work which, even in its worldly expediency, is not to be despised.

The higher order of patriotism is closely akin to religion, and the loftiest courage is always associated, if not with religious profession, at least with the deep feelings of reverence for the divine mysteries of life and death.–The man who blenches at the question, “are you prepared to die?” or worse than that, puts it off with a sneer, is destitute of true courage. Many a man who, in times of peace and safety, hardens his heart and imagines himself to be brave, will, when the battle is raging around him, howl in terrified agony of spirit to God for mercy, while the Christian soldier stands before the red crash of death, not in sight of his “Emperor,” as the French soldiers at Solforino did, but in sight of his God.

We must remark the painful evidences of the loss of the sense of our dependence on God as the war has progressed. It did not commence so. The city of Charleston is said to have been, on the eve of the battle of Fort Sumter, like on vast altar, from which ascended the incense of prayer. The whole nation, from Virginia to Texas, commemorated our early and brilliant victory at Manassas by thanksgiving in ten thousand sanctuaries of the land. But there has lately been a marked relaxation of this sense of our dependence on the God of Battles. It has been impiously said that the battle of Belmont was won by the energetic oaths of our officers. There has been a wretched plausibility that has preached in favour of immoral indulgences in our army, that has given eclat to profanity of officers in battle, and that has winked at drunkenness in the camps by questioning the military virtues of water-drinkers. We have a great work before us. It may not be assisted by the mere cant and whines of religious pretension; but it certainly will be assisted by that hearty and reverent sense of dependence on Divine Providence, and that earnest and practical habit of religious supplication which strengthened our fathers in the times of their trial, and has everywhere left their evidences of reward on the pages of history.