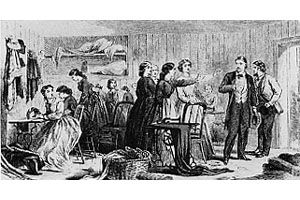 Women in Baptist life of the South — reflecting southern life at large — play a support role to the male gender. Whereas Baptist women preachers and deaconneses in the mid-18th century were not uncommon in some southern colonies, such roles for females have long since been abandoned in Baptist life. In the present war, women are expected to appreciate and applaud their men for fighting for southern rights and honor, and not infrequently are called upon to manage home and/or farm while husbands are fighting in the Confederate Army.

Against this backdrop of new but yet-confined expectations upon southern women, this week’s North Carolina Biblical Recorder prints a brief piece on “Woman and the War” under the byline of “Stella”:

The heart of every true woman throbs with pride when she realizes that in this great drama which is being acted before the world, she can take a part. She is not required to sit listlessly and fold her hands, while the din of battle is heard afar off: the war is here in our very midst! The deep booming of cannon and the heavy roar of artillery, mingled with the dying groans and shrieks of our friends and brothers, can be heard almost at our door. Well may we work untiringly for our noble soldiers, when they are pouring out their blood like water to achieve our independence. They have gone forth on a holy mission — their object is, to wrest our bleeding liberties from the hands of ruthless invaders, and trusting in the God of battles their arms will be successful, and they will return with the victor’s wreath on their brow. They have “drawn the sword for freedom,” and it will never be returned to its scabbard till our foes are forced to acknowledge our independence — till our Confederate flag shall float proudly from every southern port, and Dixie’s Land shall take her stand among the nations of the earth, in name as in deed.

Then, sisters of the South, since our brothers are so nobly doing their duty, let us act well our part in this momentous struggle for liberty; let us cheer the hearts of our brave boys by our patriotic endeavors to aid them all in our power — let us continue to ply the needle, and to send boxes of comfortable clothing to our soldiers, thus proving that we sympathize with them, that we appreciate their high-toned courage and that we are proud to claim them as brothers and friends.

By the way, Mr. Editor, wouldn’t it be a good idea for some friend to soldiers, to write a petition to our merchants entreating them not to ask such exorbitant prices for their goods? for at present rates, we who are not farmers’ wives and daughters, will soon have to suspend operations. The almighty dollar is provokingly scarce, and we can’t get credit, or at least, we are afraid to ask for it, for every store you enter, a placard stares you in the face with the words, Terms Cash, written wonderfully plain, as if the merchant feared you might mistake the meaning. Do, some good christian, try your hand at the business of softening the hearts of our knights of the yard stick. They may not all prove Pharaohs.

Reality is a bit more complex than “Stella” lets on. Many women are indeed patriotic in their sentiments, but many others resent their men leaving home and hearth to fight for the Confederacy. In the second half of the war, many soldiers abandon the fight in the face of pleadings from destitute, lonely wives to come home and provide for their starving families.

Stella’s complaint of greedy merchants, however, has much merit: in the years ahead, numerous Southern Baptist leaders will point to extortion on the part of merchants as one of the notable sins of the Confederacy. Inflation, fed by a widespread lack of confidence in Confederate currency, lies behind the soaring prices that make life increasingly difficult for southern common folk, particularly women left on the home front to care for family and lands.