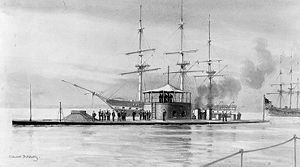 U.S. President Abraham Lincoln, growing impatient with Gen. George McClellan, commander of the Army of the Potomac, orders the general to launch offensive operations no later than February 22. Thus far, McClellan has exercised too much caution, in the estimation of Lincoln and many northerners.

Meanwhile, on New York’s East River, the Union ironclad Monitor launches on its maiden voyage, the first of its kind in the Union fleet. Observers gawk at the low-lying ship driven by a steam engine, with revolving turret and pilothouse sitting above water. The voyage proves successful, and soon the craft will be placed into service for combat.

Inland and southward, the West Virginia Constitutional Convention continues. The new state, carved out from Virginia, is loyal to the Union.

While progress of various kinds attends (even if incrementally) the Union effort today, Baptists of the South are lamenting the recent Union victory in the Battle of Mills Spring, Kentucky. The battle represents the first major setback for the Confederate Army, but …

It can not discourage the the men of the South. The conduct of our enemies, at home, and wherever they have come within our borders, leaves us no alternative but to achieve our independence or to die in the attempt. To yield would be to suffer the loss of liberty, of honor and everything which would make us desire to live or fear to die. Under such circumstances no defeat, however terrible, can diminish or change the stern resolve of Southern men to be free; this one will only arouse them to increased activity, energy and vigilance, and we confidently believe that the damage which we have suffered, with the exception of the brave men who have been killed, will soon be repaired.