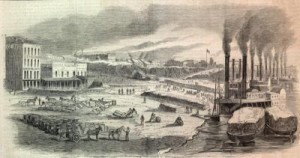 The dawning of day greets many relieved residents of Murfreesboro: the Union garrisons are gone, thanks to Confederate General National Bedford Forrest’s raid of yesterday. The war will directly impact the town a number of times yet, but for the moment life is bit more peaceful.

Meanwhile, to the west, Union forces maintain a tight control on Memphis, occupied since June 6. Nonetheless, most citizens remain loyal to the Confederacy. Resigned to their fate and going about their business, merchants quietly defy the United States by accepting U.S. currency (more valuable than faltering Confederate currency) for their goods and wares, then passing the currency into Confederate hands, thus helping, to a degree, the South shore up its finances with the enemy’s money.

The First Baptist Church of Memphis carries on an orphan’s home. Established in April 1860, the orphan’s home has since become a ministry to children of slain Confederate soldiers, yet operates independently of the Confederate government and army. The Memphis Bulletin this month publishes a brief tribute to the institution:

This institution, if we remember aright, was organized about the 1st of April, 1860, and is composed of the most respectable, because the most benevolent ladies in the city and vicinity. Since the organization of the Home many little orphans have been gathered up in the streets and alleys of the city, and made to feel there was a home, sweet home even for them. Among the ladies who have been most laborious in this work of charity we may be allowed to mention (without disparing others) Mrs. Hurlbert and Mrs. Johnston. Mrs. Hurlbert has been untiring in this commendable enterprise, and many in the last day will rise up and call her blessed. Among the evils of this civil war we have noticed with pain the rapid decay of religious interest, and the meager contributions to our benevolent institutions, unless such institutions are connected with the army. Let the ladies of the Home remember that they who give to the poor lend to the Lord, that it is more blessed to give than receive, and that in laboring to relieve the wants of the needy they are laying up treasure in heaven, where moth and rust do not corrupt, and where thieves do not break through and steal. Ladies, we beseech you banish all politics and war from your assemblies and churches, and let the world “behold how good and pleasant a thing it is for brothers (and sisters) to dwell together in unity.”