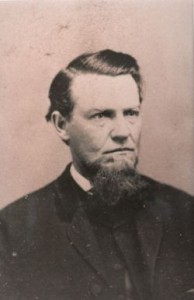 Today the Confederacy temporarily reverses Southern misfortunes on the Mississippi River, as the ironclad CSS Arkansas engages Union naval forces and damages some 19 ships before retreating. The days of the Arkansas are limited, however. Pursued by the Union ironclad Essex, the Southern vessel experiences mechanical trouble and runs aground. The crew blows up the ship to prevent it from falling into Union hands.

Far to the North and West in territory firmly under control of the United States, George M. Pinney, Sr. (1832-1906) is appointed U.S. Marshall for the District of Dakota Territory, a position he holds until February 23, 1865.

Pinney is a lawyer, Republican politician, businessman — and former Baptist minister. Following graduation from the University of Rochester and a brief stint in the ministry, Pinney had turned to the legal profession, securing a practice in Windsor, Wisconsin. In yet another career transition, Pinney soon thereafter started a new business venture and, with partners, “claimed and platted out the town of Fremont, Dodge County Nebraska.”

An active supporter of Abraham Lincoln, Pinney in 1861 had moved to Dakota Territory and quickly rose up the ranks of Dakota politics in the months following. The West, however, is not immune to Civil War tensions. Following efforts to maintain peace by convincing Dakota Governor William Jayne to station soldiers around the territorial assembly in April 1862, Pinney’s enemies “planned to physically throw him out of a window.” Shortly thereafter, Pinney had abandoned politics.

Yet Pinney’s political connections served to net him a federal law enforcement job as Dakota’s U.S. Marshall. While never serving in the U.S. Army during the war, Pinney is charged with enforcing U.S. law and protecting the federal judiciary at a critical time in the nation’s history.

As the war draws to a close, Pinney resumes his trek westward and continues his trajectory of new careers. Securing an appointment as the first U.S. Marshall of Montana Territory, he serves in the position for two years. The following year, he purchases a newspaper (The Montana Post) and, returning to politics, serves as a Montana Territorial delegate to the 1869 Republican Convention. While in Montana, he becomes engaged with a shootout with Colonel S.W. Beall, former governor of Wisconsin. Killing Beall, Pinney is tried and cleared of all charges “with the finding of self-defense.”

In 1870 Pinney and his family (he is now married to his second wife) move to Oakland, California where he purchases a seat on the San Fransisco Stock Board and becomes a purchasing agent for the U.S. Naval Paymaster. Although rising to become a prominent citizen of that city, his fortunes take another turn for the worse in the course of a nasty divorce, public accusations of philanthropy, and an indictment of embezzlement, fraud and forgery. Following a three year court battle, Pinney is finally acquitted of all charges.

From California, Pinney moves to London, England in the 1880s, where for six years he trades mining interests on London’s exchange and lives as a bachelor. Returning to the states, he settles in New York City, working as a mining trader/broker. In the years following he travels throughout the United States and Europe, prior to his death in 1906.

Pinney’s life trajectory, other than his brief stint as a Baptist minister, is not unusual for adventurous, enterprising Northern men of the Civil War era and late 19th century. Many  such individuals follow the westward expansion of the American frontier, utilizing their abilities and skills to adapt to the changing opportunities afforded capable men on the frontier. Upon the settling of the West, some men such as Pinney return to the East and, using knowledge and resources gained on the frontier, live comfortable city lives.