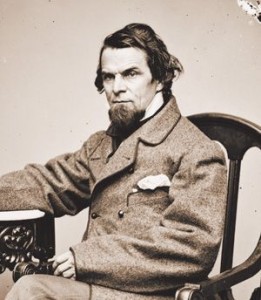 Many white Southern Baptists do not mince words when excoriating the United States, as one example in today’s North Carolina Baptist Biblical Recorder amply demonstrates.

Mr. Ely, a Federal Congressman, who, our readers will recollect, was captured at the battle of Manassas and for some time confined in Richmond, as a prisoner of war, was very profuse in his professions of gratitude for the kindness shown him. But since his release he has published a journal of his prison-life in which he sadly belies the Southern people. The Philadelphia Presbyterian in noticing the book says:

“The perusal of the journal he kept, while a prisoner, will not be likely to exalt our notion of Southern chivalry. The treatment of our prisoners was neither magnanimous or humane. Exceptional cases to the contrary alone prevents the whole South from being execrated.”

They execrate the South. This is no doubt true. And yet they profess to be fighting a union with the objects of their execration. What inconsistency and falsehood!

New York Congressman Alfred Ely, who (like hundreds of Washington residents) had ventured to the Manassas battlefield as a spectator, had been captured and imprisoned in Richmond for six months.

In his diary dismissed by Southerners, Ely speaks much of his Christian faith (although not clearly identifying his affiliation), and describes Sabbath worship services while in prison. By his own account, Ely is often treated well by his captors, albeit he does voice a variety of complaints.

In the second half of the war, however, as battlefield losses mount and the war grows ever bloodier and desperate, some war prisons South and North are often overcrowded with unsanitary conditions and shortages of food.