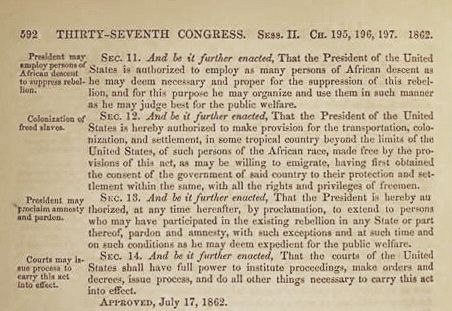 For months, many Northern Baptists have been agitating the U.S. Congress to pass a confiscation act that will permanently free African slaves. Today, their wishes, as well as those of many Northern Christians at large, are granted, as Congress passes the Second Confiscation Act that is, in effect, an emancipation proclamation that grants permanent freedom to slaves of Confederates “engaged in rebellion against the government of the United States.” Effective only in Union-occupied areas of the South, the proclamation is nonetheless a breakthrough moment in the gradual elimination of slavery.

Ever cautious, U.S. President Abraham Lincoln continues to court the ongoing support of the border states, now suggesting that they enact their own program of gradual compensated emancipation, aided by the financial resources of the United States. Yet, while the border states remain in the Union, they decline the option of compensated emancipation.

Sections 9-13 of the Second Confiscation Act read as follows:

SEC. 9. And be it further enacted, That all slaves of persons who shall hereafter be engaged in rebellion against the government of the United States, or who shall in any way give aid or comfort thereto, escaping from such persons and taking refuge within the lines of the army; and all slaves captured from such persons or deserted by them and coming under the control of the government of the United States; and all slaves of such person found on [or] being within any place occupied by rebel forces and afterwards occupied by the forces of the United States, shall be deemed captives of war, and shall be forever free of their servitude, and not again held as slaves.

SEC. 10. And be it further enacted, That no slave escaping into any State, Territory, or the District of Columbia, from any other State, shall be delivered up, or in any way impeded or hindered of his liberty, except for crime, or some offence against the laws, unless the person claiming said fugitive shall first make oath that the person to whom the labor or service of such fugitive is alleged to be due is his lawful owner, and has not borne arms against the United States in the present rebellion, nor in any way given aid and comfort thereto; and no person engaged in the military or naval service of the United States shall, under any pretence whatever, assume to decide on the validity of the claim of any person to the service or labor of any other person, or surrender up any such person to the claimant, on pain of being dismissed from the service.

SEC. 11. And be it further enacted, That the President of the United States is authorized to employ as many persons of African descent as he may deem necessary and proper for the suppression of this rebellion, and for this purpose he may organize and use them in such manner as he may judge best for the public welfare.

SEC. 12. And be it further enacted, That the President of the United States is hereby authorized to make provision for the transportation, colonization, and settlement, in some tropical country beyond the limits of the United States, of such persons of the African race, made free by the provisions of this act, as may be willing to emigrate, having first obtained the consent of the government of said country to their protection and settlement within the same, with all the rights and privileges of freemen.

SEC. 13. And be it further enacted, That the President is hereby authorized, at any time hereafter, by proclamation, to extend to persons who may have participated in the existing rebellion in any State or part thereof, pardon and amnesty, with such exceptions and at such time and on such conditions as he may deem expedient for the public welfare.