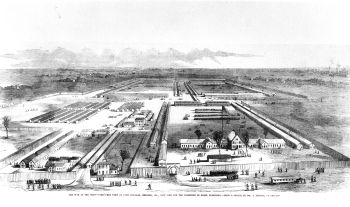 Camp Douglas, Near the City of Chicago

The United States is now interring prisoners of war in Camp Douglas near Chicago. The city also sends many soldiers to fight for the Union. Today, the ladies of Chicago’s First Baptist Church display their patriotic side, as noted in the Chicago Daily Tribune:

On the morning of the 3d inst., a committee of ladies from the Soldiers’ Aid Society of the First Baptist Church of this city, consisting of Mrs. James Woodworth, Mrs. Evan Higgins, Mrs. Frank Van Wycke, and Mrs. Brayman, accompanied by Evan Higgins, Esq., left with a large supply of necessaries and luxuries and comforts for our soldiers at Pittsburg. The friends of the Chicago Legion will be glad to know that in view of the losses of that part of the army at the battle of Farmington, several boxes were set apart especially for their benefit.

The ladies of the society take this opportunity to offer their acknowledgments to the various citizens who so generously responded to their appeals as to enable them to leave with twenty-six boxes, at a low estimate worth between $600 and $700, besides numbers of packages from friends to various soldiers in different regiments.