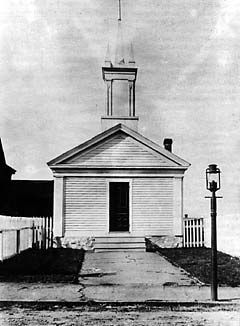 In 1846, one year after Baptists North and South had divided over the issue of African slavery, white and black Baptists in Stonington, Connecticut reached a mutual decision regarding their respective but related future.

Believing that the time has come when the interests of religion, especially among the people of color in this village and vicinity, would be promoted by our organization into a separate body; We therefore request that letters of dismission may be granted to us whose names are hereunto annexed for the purpose above specified.

In making this request, Dear Brethren, we think we are activated by motives of Christian Charity solely. Were we to consult our own edification simply, it would be our privilege to remain with you, and sit beneath the droppings of your Sanctuary. But we feel that we ought to attempt to do something for the spiritual welfare of our own brethren according to the flesh, something which shall bring them more immediately under the renewing and saving influence of the glorious gospel.

We are tremblingly aware of the responsibility we are assuming and Earnestly request your prayers and sympathy.

We shall never fail to cherish an affectionate remembrance of you; and though, with your permission, gathered into a separate body, shall still feel that we have a claim to your council and watchcare.

The petition came some 70+ years after the Baptists of Stonington played a role in the formation of what is considered to be the first African Baptist congregation in America.

Rev. Wait Palmer (or Waite Palmer), who in the 1740s had been the first Baptist minister in the Stonington area (and preached and pastored in the area through the Revolutionary war era) and who had also baptized Shubal Stearns (considered a key Baptist figure in the rise of Separate Baptists of the South), in the early 1770s apparently embarked on a preaching tour of the South. In 1773, Palmer, working with emancipated slave and newly-converted George Leile (who would become the first ordained African Baptist pastor in Georgia), assisted in the formation of an African Baptist congregation in Silver Bluff, South Carolina on the Galphin Plantation, located near Savannah, Georgia. The congregation eventually became known as the First African Baptist Church of Savannah.

An 1849 article in the local newspaper, the Extinguisher, reported on the progress of the Third Baptist congregation and race relations among Baptists:

We are rejoiced that our colored population have now a place where they can worship without fear or molestation; and as we have listened to their fervent prayers and unassisted sweetness of their songs, we have been constrained to believe that in the sight of man only is there a respect of persons.

In the decade following, Sabbath School became a central ministry of the congregation, an avenue for educating the town’s African population.

Now, members follow news of the ongoing war with both anxiety and hope. Freedom for all Africans in America is at stake, and

We are not indifferent spectators of the dreadful strife now raging in our country … Two of our members were for many years slaves. Though denied the privilege to enter the army to fight, we will pay our taxes when demanded …

The commitment to freedom remains strong among congregational members in the months and years after the war. In 1865 they note, “… whenever we are permitted to vote, we shall be sure not to vote for bondage or oppression in any form… We have a destiny in common with all the sons and daughters of Africa which we are bound to fulfill.” Yet in 1867 Third Stonington members lament that their own freedoms are now not equal to those of emancipated Southern Africans.

We are glad liberty has been proclaimed throughout the land and we are anxiously looking for the day when colored people of Connecticut shall enjoy equal privileges with the Freedman of the South; when Connecticut shall be as free as South Carolina.

In reality, for African Americans both North and South, the full privileges of freedom and the dream of equality are not realized for many more decades as American society and institutions of the late 19th and early 20th centuries maintains a racist world view that marginalizes black citizens.