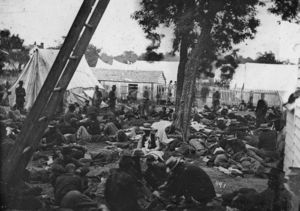 Today’s Battle of Savage’s Station marks the latest in a string of battles collectively known as the Seven Days Battles. Union forces, led by Maj. Gen. George B. McClellan and outmaneuvered by Confederate General Robert E. Lee’s Army of Northern Virginia, are now falling back from their positions near Richmond. Lee attempts to press his advantage further today, but miscommunication with Maj. Gen. Thomas “Stonewall” Jackson and other officers hinders his offensive. As a result, today’s engagement results in a stalemate, with the Union suffering 1038 casualties and the Confederacy 473. Nonetheless, the Union campaign to capture Richmond has been thwarted, and night falls with Lee securely in the driver’s seat.

An undetermined number of Baptist soldiers, representing both North and South, die upon the battlefield today. One of the deceased is Confederate John Thurmond Reese, Company I, 7th Regiment, South Carolina Volunteers. Born June 16, 1838, Reese is barely 23 years of age upon his death. A lay member of “the Baptist Church at Hardy’s,” Reese is survived by his father, brothers and sisters.

The death of John T. Reese, like that of many other male Baptist church members throughout the Southern Confederacy, leads surviving family and church members to mourn the untimely passing of a young man. While the emotional pain is intense, for Baptists, the promise of heaven offers consolation that a son’s and brother’s death on earth is not the final chapter of a short-lived earthly life.