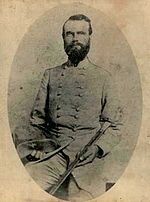 While Sunday church services are underway throughout the Confederacy, the fortunes of the new nation take yet another turn for the worse.

Confederate Major General Leonidas K. Polk, an ordained bishop in the Episcopal Church, forsakes his vision of Kentucky as a line of defense against Northern encroachment. Having earlier occupied portions of Kentucky wihtout official authorization of the Confederate government, Polk today completes his withdrawal from Columbus, Kentucky. Many Kentuckians are quite happy, as sectional sentiment is split fairly evenly in the state, which is officially neutral in regards to the war. Evacuating Kentucky, Polk establishes a new defensive line on the Mississippi River immediately north of Memphis.

The Confederates, however, are not entirely giving up on the state of Kentucky. Richard M. Gano (1830-1913), a Kentucky native living in Texas and descendant of Baptist legend John Gano (former pastor of the First Baptist Church of New York and known as the “Fighting Chaplain” during the Revolutionary War), has organized a cavalry squadron of two companies. Assigned to Col. John Hunt Morgan’s 2nd Kentucky Cavalry at Chattanooga, Tennessee, and given command of Company G, Gano prepares for raids into Kentucky in the months to come. Gano serves as a cavalry officer throughout the remainder of the war, achieving rank of brigadier general in March 1865.

In his religious sentiments, the Confederate officer follows a path that many Kentucky Baptists of the pre-war era trod: he becomes enamored with the Restoration Movement of Alexander Campbell and Barton W. Stone and joins a Disciples of Christ church at a young age. When the war is over, Gano returns to his native Kentucky and is ordained a minister of the Disciples of Christ church. In the ensuing decades, Gano serves as a bi-vocational pastor, becoming a millionaire as a cattleman with operations in Kentucky and Texas.