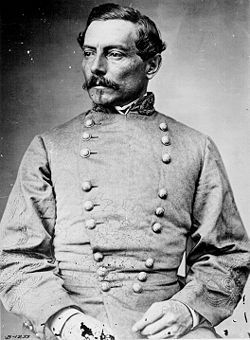 P. G. T. Beauregard, Commander of the CSA Army of the Potomac

Baptists of the South routinely criticize the evilness of Confederate Army camp life. Gambling, alcohol, sabbath-breaking and other vices increasingly come under withering condemnation. This week, the Southern Army of the Potomac, under the command of Brig. Gen. P. G. T. Beauregard, is scrutinized in the Baptist press. The date of this first-hand account of camp life is uncertain.

As regards the physique of the Army of the Potomac, much can be said of a gratifying nature, as under the genial influence of autumnal airs the men are healthy, buoyant and strong, and able to do effective service. But I am sorry its morale presents not to my mind the same favorable aspect. If there is any place where wickedness is carried to perfection and the Devil reigns supreme, it is the camp, where assemble candidates for death and eternity! It is a sad reflection, that the very men whom God has shielded in the day of battle, crowned with victory, and delivered from foul disease, should find no better use for His holy name than as a bye-word of reproach and blasphemy! Now, I admit this is not the case with all. There are many good and pious men in the army. Indeed all our men are true, generous and brave. But stubborn facts sustain me in saying that a majority, an appalling majority, while they regard not man, just as assuredly fear not God. And the reasons are apparent why military produces so much more wickedness than civil life.–Soldiers are engaged in a business, above all others, the most exciting and absorbing; they are away from the restraining influences of home, the Sabbath school, the church, and in a great measure, from the means of grace And in their case the doctrine of passive impressions is illustrated in that, being familiar with scenes of death, they do not look upon it with that degree of solemnity and interest which always attaches to it in the piping times of peace. And to all this may be added, that more than any other class of men, they are subject to temptation.

Source: “The Spiritual Condition of the Army of the Potomac,” Biblical Recorder, March 5, 1862 (link); photo (link)