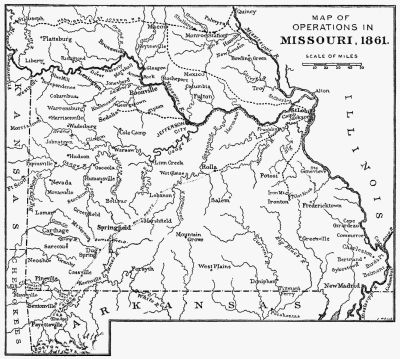 Although the Union is securely in control of Missouri, bands of rebel guerrillas yet cause problems for the U.S. military. Today the general in charge of the Northwest Missouri district issues a report of recent rebel activity. One of the prominent culprits fingered is a Baptist preacher.

GENERAL: Late last night Colonel Catherwood returned from Liberty. In a conversation had with him I learn that the bandit, Quantrill, severely–perhaps mortally–wounded two recruits in the Missouri State Militia of those at Liberty. One was deliberately shot in cold blood after he had been taken as a prisoner. Eight were taken off as prisoners. The flag raised by General Prentiss was torn down and a secession one hoisted. Quantrill recrossed into Jackson County. Colonel Catherwood tore down the rebel flag and ran up the stars and stripes in its place. He left about forty-five men, part of Captain Johnson’s company, in Liberty; the remainder would be ordered there today. I also learn from Colonel Catherwood that Parker stopped the steam-boat Rowena and after examining the manifest and finding the principal part of the cargo shipped to Messrs. — — he selected about six dozen pairs of boots and some other articles which he took and then permitted the boat to resume her trip. Colonel Catherwood also informed me that among the prisoners captured were Henry L. Routt, a lawyer of Liberty, a most notorious rebel and a very desperate man. He has been charged with instigating the arrest of ex-Governor King last fall and of Judge Birch more recently. I suppose there can be no trouble in showing him to have been very extensively and actively engaged in the rebellion. Also President Thompson, a Baptist preacher and president of the Liberty College, it is said a very bitter, violent and bad man. He is certainly a man of ability. I think they ought to be sent to Saint Louis or confined outside of the State.

I have here in jail Robert W. Donnell, president of the Branch Bank of the State of Missouri at this place; Israel Landis and William K. Richardson, citizens of this place. They have been very active aiders in the rebellion. They are confined in jail for refusing to give bond as required by General Halleck’s late circular. They persistently refuse to permit their friends to give the required bail although they have voluntarily offered even insisted on doing so. They–Donnell, Landis and Richardson–believe they are advancing the cause of the rebellion (they are professing Christians) by remaining in jail. In my opinion it would be advisable to remove them without the State. In their absence I doubt not many of their adherents being relieved of their presence and influence would return to their allegiance. Tomorrow two companies–viz, Captains Phelps’ and Drumhiller’s–will start for Liberty under command of Colonel Kimball. Captain Johnson with his company is there, and Captain Folmsbee with his company from Gallatin will be ordered there as soon as they are paid which will be in a day or two.