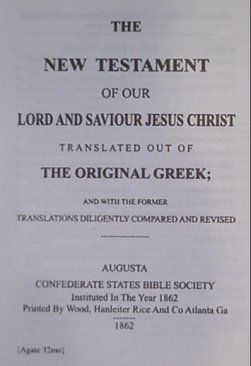 A United States prohibition on commerce with the Confederacy has resulted in a shortage of Bibles in the South, as the American Bible Society is no longer allowed to sell or distribute Bibles southward. Exasperating this situation, the capture of the city of Nashville in February has shut down printing presses that were publishing pocket-sized New Testaments for southern soldiers.

In response, southern Christian leaders from across denominational lines assemble today in Augusta, Georgia for the Bible Convention of the Confederate States of America.

Remaining state and localized efforts to print and distribute Bibles in the South are fragmented and ineffective. Therefore,

immediate steps should be taken to secure the organization of a General Bible Society for those Confederate States, which shall become for us all that the American Bible Society was for the late American Union, an inexhaustible source of home supply and a common Agent for the prosecution of our work in foreign lands ….

RESOLVED, That in the opinion of this Convention, the organization of a BIBLE SOCIETY, of the Confederate States of America, for the circulation of the Holy Scriptures, without note or comment, in our own and in foreign lands, is imperatively demanded; and should be secured at the earliest practical moment.

A committee is thus formed to represent various southern denominations in writing a constitution for the proposed Bible Society of the Confederate States of America. Presbyterians, Methodists, Episcopals, Methodists, Baptists, Lutherans and French Huguenots are represented on the committee. The two Baptist members appointed to the committee are Dr. Winkler and J. H. Hamilton.

Two days later a constitution is passed and the Bible Society is officially created. W. D. Rice, General Superintendent of the Baptist Colportage Board, offers to represent the Confederate Bible Society among Southern Baptists. By the end of the year, Bibles are once again available for distribution, and Southern Baptists become heavily engaged in purchasing and distributing Bibles among Confederate soldiers.

Source: An online copy of the Proceedings of the Bible Convention of the Confederate States of America is available from the University of North Carolina at Chapel Hill (link)