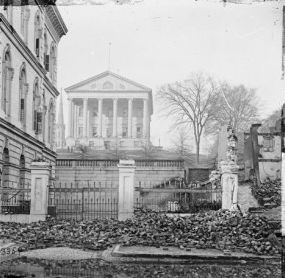 Christian patriotism is on display in the Confederacy today. The Confederate Congress, now in session, is opened by prayer, offered by J. Lansing Burrows, pastor of Richmond’s First Baptist Church. Congressmen receive a letter from Georgia’s Methodist Conference, containing resolutions expressing “gratitude to Almighty God for his kind interposition in behalf of the South” and recommending a weekly prayer meeting to denounce any attempts to reconstruct the “Union.” The Methodists also voice opposition to proposals to reduce the pay of Chaplains in the army.

Baptists, on the other hand, stand alone in refusing government pay for army chaplaincy service, one line of demarcation of church state separation they will not cross. Refusal to accept government money, however, does not weigh upon Southern Baptists’ strong support for army mission work, as yet another commentary in the Baptist press notes.

Every Christian patriot must feel the deepest solicitude in regard to the spiritual interest of soldiers. As immortal beings constantly exposed to danger, and liable at any moment to be hurried into the eternal world, as our fellow citizens, battling for independence, as those who are being trained in the camp to exert a tremendous influence, for weal or wo, on the destinies of their country, we can not be indifferent to any thing which promises to restrain them from vice or strengthen the principles of virtue in their hearts. Hence the alarm and indignation with which all serious minded men have beheld the inroads of intemperance among them. Hence, the appeals in behalf of army-colportage have been responded to with a liberality unparallelled in the history of the country and the gigantic proportions which that enterprise has assured in so short a time. The Christians of the Confederate States have hailed with delight the appearance of every instrumentality designed to counteract the evil influences to which the soldier is exposed and to ameliorate his spiritual condition. For the accomplishment of this work, every available means should be brought to light, and used in the best manner possible. On this account we would urge ministers now enlisted as soldiers, to be vigilant and active in their efforts to save souls. Many of them were eminently successful at home, and they may be equally so, in the position which they now occupy. The duties of the soldier and the minister do not conflict with each other, and in assuming the garb of the one, the responsibilities of the other need not,–they can not,–be laid aside.

His obligations to be be useful to those around him in his new sphere, are as strong as when he was at home engaged in the discharge of his regular pastoral services.

As a private soldier, he may often speak a word for Christ. Opportunities to preach will occasionally be presented, and these he should faithfully improve. He may visit the sick and suffering, and converse and pray with them; distribute tracts; and by a course of consistent piety, be eminently useful in restraining vice, and encouraging those who would otherwise yield to the temptations which beset them. Let him be watchful, and opportunities to do good, will not be wanting.

Many preachers are officers in the different regiments. While their duties do not allow them to come into direct contact with their men so often, there is much that they can do. The life of Havelock, the hero of the late rebellion in India, teaches us that an officer in the army may do much to promote the spiritual welfare of his men. He may use his personal efforts to a considerable extent, and he may throw around them the silent, yet powerful influence of a consistent Christian life.