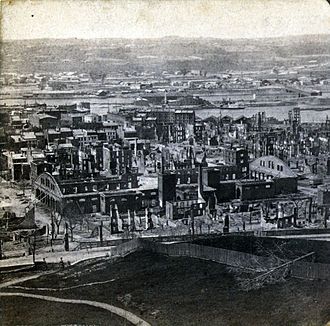 The city of Troy, New York, prior to the Civil War grew to become one of the 20th largest cities in America. Growth, however, came with consequences. Like many other cities of the early and mid-nineteenth century, the city of largely wooden buildings has by now experienced a series of increasingly destructive fires.

Today, however, all previous fires pale by comparison to a monstrous inferno sparked by a locomotive crossing a covered wooden bridge near the city. Embers from the burning bridge, whipped up by a strong westerly wind, drive the fire into Troy. By days end, 508 buildings are in smoldering ruins and at least eight lives are lost. The financial loss amounts to some $4 million dollars, a very large sum for the time.

Among the ashes is what is left of the factory of the W. & L. E. Gurley firm, renowned makers of engineers’, surveyors’ and mathematical instruments. The initials are those of William and Lewis E. Gurley, the prosperous business owners. The Gurleys’ mechanical instruments are in wide demand as the nation expands westward with the rails and complex mathematical calculations are utilized in sighting cannon fire during the war. The two brothers quickly rebuild, opening a new factory seven months later.

Lewis Gurley is a prominent citizen of Troy, a leader in educational efforts and destined to become the president of the Union National Bank of Troy. He is also a leading Baptist of the city. As is later written of Lewis:

In church affiliations Lewis E. Gurley was a Baptist, and for over forty years he was superintendent of the Sunday school of the Fifth Street Church. For twenty-five years he was president of the County Sunday School Union. He took a deep interest in the Young Men’s Christian Association, and was particularly liberal toward the railroad branch of this work.

The story of the Gurley firm provides an example of one of the greatest assets the United States has in the war against the Confederacy: a vibrant manufacturing sector. The agrarian South, its economy before the war dependent almost solely on cotton exports, is unable to provide the industrial infrastructure necessary to finance and sustain a prolonged war effort. Minus a significant manufacturing sector to support the Southern war machine, intense and ongoing efforts by white Southern elites to motivate common white folk to fight against the Northern enemy, in a war that drags on for years, ultimately fall short.

Thus, while Troy, New York rebuilds quickly in the months following today’s devastating fire, the Union army’s deepening penetration of Southern lands as the year progresses produces long-term desolation in much of the South.