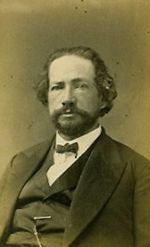 This month, Southern Baptist’s lone seminary closes its doors in response to war-time pressures. Commencement is canceled at the Southern Baptist Theological Seminary in Greenville, South Carolina, as many students have already joined the Confederate Army.

Seminary faculty in the weeks and months ahead engage the Southern war effort in various ways. President James P. Boyce (1827-1888) has been serving as a chaplain in the Confederate Army for a number of months. Upon the closure of the seminary, he resigns as chaplain and is re-elected as a representative in the South Carolina legislature. In 1863 he runs for the Confederate Congress, but loses in a campaign in which he is opposed by many of his Baptist friends who, committed at least in part to the Baptist heritage of church state separation, believe that Christian ministers should not seek public office (many earlier Baptists did not define church state separation as precluding public service, believing that individual Baptists were as free as anyone to run for office, as long as they did so as individuals, rather than as religious representatives of churches or other religious bodies). Throughout the remainder of the war, Boyce remains active in state politics and lends his support to the Confederacy.

John A. Broadus preaches in local churches and serves as an evangelist to General Robert E. Lee’s Confederate Army of Northern Virginia.

Basil Manly and William Williams, on the other hand, upon the advice of Boyce remain exclusively on the home front. Moving away from Greenville, the two scholars, funded by Boyce, rent plantations and grow crops while serving as pastors in local congregations and furthering their scholarly studies. Boyce is convinced that “the war will be decided by money; the side that manages its finances best will succeed.” Boyce’s charge to Manly and Williams is to raise food crops and store the surplus for the future, when Northern blockades of Southern ports during a prolonged war make food a valued commodity.

The seminary president’s keen grasp of the future trajectory of the war thus serves his faculty well, and the school reopens following the long conflict.